Singaporeans remain largely conservative on issues such as homosexuality, abortion, casual sex and prostitution, but deem the likes of divorce, euthanasia and the death penalty as more acceptable, according to the findings of a study released yesterday.

Overall, the Republic has become more liberal since 2002, the first time it participated in the World Values Survey (WVS) - a global research project monitoring changing public beliefs and their socio-political impact over time across 80 societies.

Compared with the others, though, Singapore's respondents weighed in at the middle of the spectrum for issues around sexuality and family, with the likes of Australia, the United Kingdom and the United States registering more liberal mean scores of six to seven, while China emerged as the most conservative with scores of one to three.

Survey respondents were asked to rate a list of issues on a scale of one to 10, with one as never or seldom justifiable and 10 being mostly or always justifiable.

For Singapore's respondents, there were no mean scores larger than five, indicating low levels of acceptance for all the issues surveyed overall.

The third and latest edition of the survey, conducted by the Institute of Policy Studies (IPS) from November 2019 to last March, also found that religiosity in Singapore has been on the wane - although familial values like filial piety continue to hold firm.

Over 2,000 Singapore citizens and permanent residents aged above 21 were interviewed face to face by IPS in a survey sample size representative of the general population.

Asked for their views, 68.3 per cent of respondents said prostitution was never or seldom justifiable, with 67.3 per cent saying the same for casual sex, 60.3 per cent for abortion, 59.3 per cent for homosexuality and 57.2 per cent for parents beating children.

Over a quarter also agreed that homosexual parents were just as good as other couples - a low proportion compared with Japan (56.9 per cent) and Hong Kong (51.5 per cent) but higher than Malaysia (20.9 per cent) and South Korea (22.7 per cent).

On other matters, a majority felt it was sometimes, mostly or always justifiable to carry out the death penalty (63.5 per cent), euthanasia (50.6 per cent), premarital sex (54.1 per cent) and divorce (57.1 per cent).

In its report, IPS noted that most of the respondents' mean scores were higher than those in 2002, suggesting they were marginally more liberal compared with the first cohort. But there were exceptions, such as bribery and tax evasion, where mean scores were even lower - suggesting a strong societal consensus on abiding by the rule of law in Singapore.

IPS noted that most of the respondents' mean scores were higher than those in 2002, suggesting they were marginally more liberal compared with the first cohort. But there were exceptions, such as bribery and tax evasion, where mean scores were even lower - suggesting a strong societal consensus on abiding by the rule of law in Singapore.

But those who professed support for liberal norms of sexuality were still in the minority within their respective demographic groups, said the researchers, who concluded that the findings broadly suggested that Singapore's societal values remain predominantly conservative. 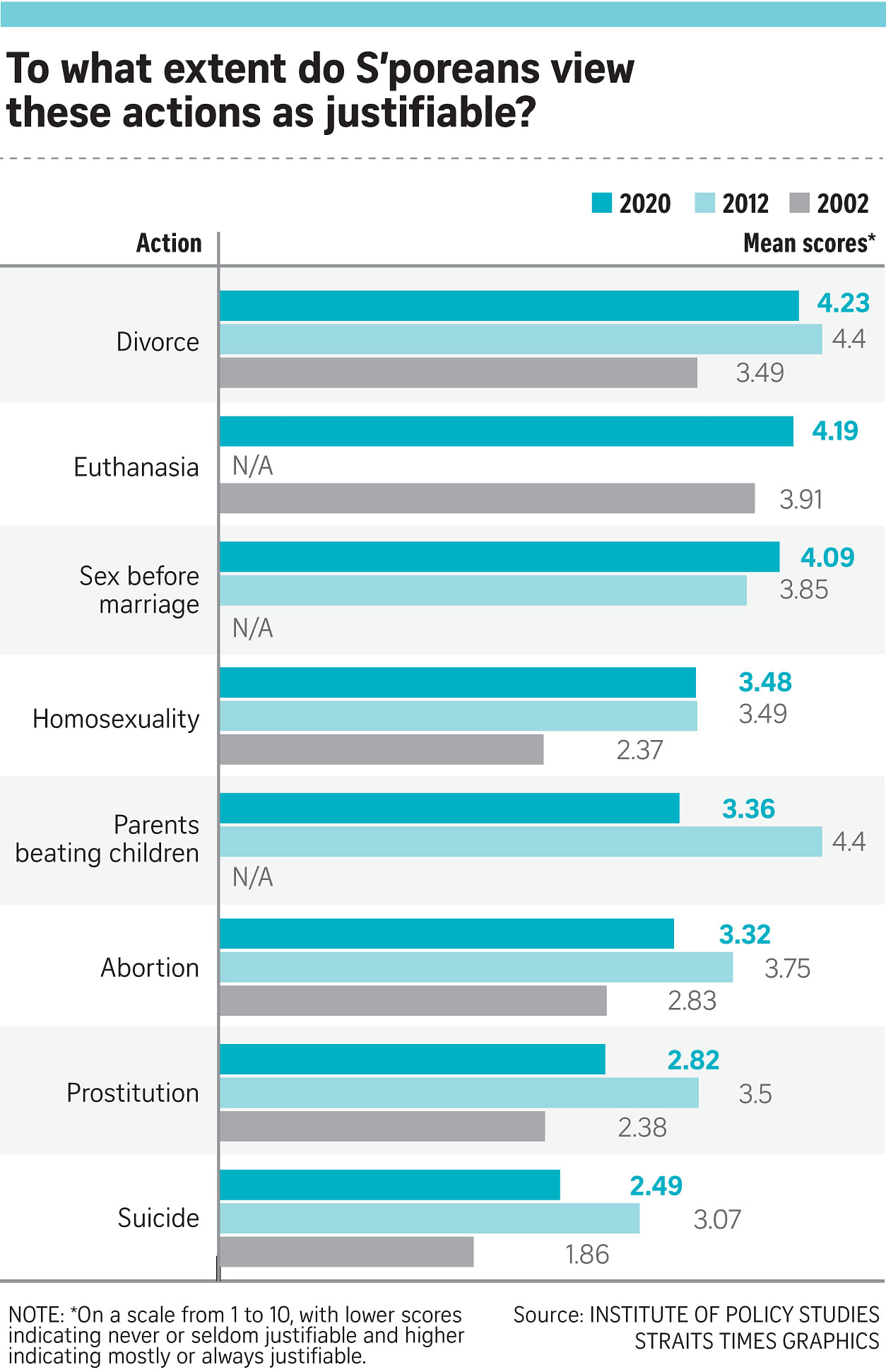 The study also found that aside from respondents who professed no religion, Catholics formed the largest proportion (18.3 per cent) who saw homosexuality as mostly or always justifiable.

Those who identified as Muslim formed the highest proportion (75.2 per cent) of respondents who felt the opposite - that homosexuality was never or seldom justifiable.

The report also noted that overall, religiosity in Singapore has waned over the past two decades, with the proportion viewing religion as important dropping from approximately 76 per cent in 2002 and 2012 - when the second WVS survey was held - to 65.3 per cent in 2020.

But Singapore's proportion of 80.1 per cent believing in God was higher than other Asian societies like Japan (54.8 per cent) and Hong Kong (53 per cent), although there were also 95.2 per cent of Malaysians and 82.5 per cent of Taiwanese who said "yes" to belief in a higher power.

In Singapore, more Muslims (26.6 per cent) and Protestant Christians (22.3 per cent) strongly agreed that whenever science and religion come into conflict, religion would always be right.

Those two groups were also more likely to support exclusivism - that one particular belief system is true - with 21.9 per cent of Protestants and 17.7 per cent of Muslims strongly agreeing that theirs was the only acceptable religion.

To what extent do S’poreans view these actions as justifiable?