SINGAPORE - The Founders' Memorial Committee has recommended that Bay East Garden be the site of a tribute to Singapore's founding leaders and that the memorial be opened to the public by 2025, the year Singapore marks its 60th year of independence.

In a statement on Monday (Aug 7), the 15-member committee - formed in June 2015 - said it has submitted its report to the Government after more than two years of  public consultations through focus group discussions, surveys, workshops and public showcases. The committee, led by Esplanade chairman Lee Tzu Yang, said it has reached out to 32,000 people.

Tasked with gathering views from the public and conceptualising a suitable memorial, the committee has come up with six key findings from its engagement with Singaporeans.

The six key findings are:

1. Singaporeans have expressed strong support for a values-based, forward looking Founders' Memorial to commemorate the values and ideals of independent Singapore's founding leaders and to inspire current and future generations

2. There was a strong consensus that the memorial should be at Gardens by the Bay's Bay East Garden, as its park setting and proximity to water is a good reflection of Singapore's status as a Garden City. The other proposed site was Fort Canning Park

3. Singaporeans also called for an indoor gallery with educational and interactive programmes 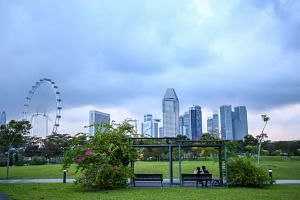 4. The memorial should leverage the expertise of  heritage institutions and work closely with user groups and the wider community in designing programmes that would allow the memorial to be a "living memorial", so it would remain relevant to future generations

5. While Singaporeans agreed that time and care should be taken to develop such a nationally significant memorial, many Singaporeans were keen to see the memorial developed sooner rather than later. In particular, the elderly who lived through the early years of independence expressed a desire for the memorial to be completed soon, so that they could personally relate their stories to the younger generation and share how they had seen Singapore transform and progress over their lifetime;

6. Singaporeans hoped for the memorial to be one that would reflect the national identity and values

Mr Lee said the committee's two-year engagement journey brought people of different backgrounds and interests together for a project that "evoked heartfelt responses and a sense of unity and purpose in discussing what it means to be Singaporean".

"The committee would like to thank everyone who joined us in this journey for their contributions. It is our sincere hope that both the process of bringing the memorial to fruition and the memorial itself will also be unifying for generations to come," he added.

The committee's full report can be found here.