SINGAPORE - In the wake of growing inter-ethnic tensions across the globe, a commitment to safeguard religious harmony is important, said President Halimah Yacob on Thursday (June 20).

The President was referring to a pledge made by more than 250 religious organisations in Singapore on Wednesday at the opening of the three-day International Conference on Cohesive Societies.

The religious organisations had made a seven-part commitment to develop strong bonds across religions. These include an affirmation to uphold the freedom of religion and maintain solidarity in times of crisis.

"That commitment is very important because it is not just a general statement but it is quite specific as to what they (religious leaders) want to achieve with their own religious communities," she said.

Speaking to reporters on the sidelines of the conference at Raffles City Convention Centre on Thursday, President Halimah added that she hopes the commitment will reinforce peace and harmony in places beyond religious settings in Singapore, such as in schools and at work.

"It (the commitment) is not confined to just the religious communities," she said.

"This is a commitment that can be used in different settings, such as community settings. It can be used to reinforce the values of cohesion, the need to preserve peace and harmony, used in schools, workplaces. There is a multiplier effect and that is something that we want to see." 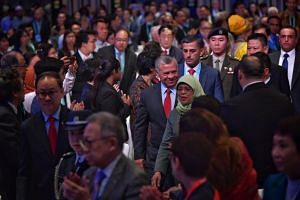 She noted that race and religion is not an easy topic to discuss "in an open and frank manner" but such discussions are needed.

"Globally it is even more challenging (to discuss). But yet we need to have that conversation," she said, adding that conference delegates have called for an international platform to discuss matters of faith and religion.

Around 1,000 academics, government officials and members of religious and civil society groups from close to 40 countries are attending the three-day event.

"At the end of the day, it is harmony and stability that will ensure we have sustainable development," she said, adding that those attending the conference also called for a rejection of all forms of hate, intolerance and misinformation.

But it is not just a job for government leaders.

"It includes individuals as well, in ensuring that we contribute towards having cohesion and therefore harmony and peace," she added.

President Halimah hopes the calls for an international platform to discuss matters of faith and religion will gain momentum and foreign delegates will start their own initiatives at home.