SINGAPORE - The combined schools choir returns to the National Day Parade (NDP) after a five-year absence to join the military tattoo performers, making this year's tattoo the largest since the parade moved to the Marina Bay Floating Platform.

Conductor Lim Jiuan said that the choir is making a return because this year's NDP parade segment involves many schools.

"This is why the organisers made a special effort to bring us in," said Ms Lim, who teaches at Nan Hua High School.

Last year's segment had about 170 performers.

Ms Lim said that the choir, comprising students from East Spring, Riverside, Unity and Yuhua secondary schools, began practising in March. She said the hardest part was synchronising their singing and dancing with the tattoo's other performers.

President Halimah Yacob, who visited the choir and other performers during a practice session at the floating platform on Wednesday (July 18), said: "This opportunity given to our young to take part in the National Day Parade is also an opportunity for them to put on a show and celebrate our nationhood and sovereignty with everyone." 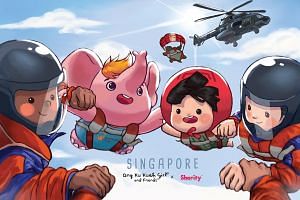 Students to take on more roles at this year's NDP

She added that the students also learn values such as hard work, teamwork and commitment. "These are values that will hold up for our students not just when they are in school, but also when they go out to work. These are lifelong values."

Madam Halimah added that the military tattoo segment is her favourite part of NDP because it reminds her of Singapore's first few national day celebrations. "I remember that when I was young, they used to decentralise the celebrations and had military groups moving through all the housing estates," she said.

Student Noraidilsahiq Norasif, who is from the Yuhua display band, will be participating in the tattoo. The tuba player said that while he is nervous, being in the NDP also makes him happy.

"I have always watched the parade but now I'm standing on the platform. It will be memorable," said the 14-year-old.