Efforts to curb problem gambling and prevent football and social clubs from over-relying on jackpot machines for revenues have paid off, with fewer establishments now operating them.

Giving a report card of measures implemented since last July, the Ministry of Home Affairs (MHA) said on Thursday (May 3) that there are 42 clubs operating jackpot machines, about 31 per cent fewer than the 61 clubs that did so last October.

The number of machines has dropped by about 20 per cent, from more than 1,800 last October to fewer than 1,500 now, which is the lowest in more than 20 years.

The latest measures, which kicked in on Tuesday, allow individuals to exclude themselves from jackpot machine rooms via a one-time application on the National Council on Problem Gambling's website. Applications had to be made on a club-by-club basis previously.

A spokesman for the Ministry of Social and Family Development said there are now 2,051 self-exclusion orders from jackpot machine rooms in private clubs, up from 1,500 in May last year.

A new rule also sees those banned from casinos under family, automatic and third-party exclusion orders being barred from playing jackpot machines. There were 51,000 such individuals at the end of March. Clubs must verify an individual's exclusion status at entry.

"This latest tranche of measures will build on earlier efforts to reduce the availability and accessibility of FMs and to strengthen social safeguards," said MHA on Thursday. 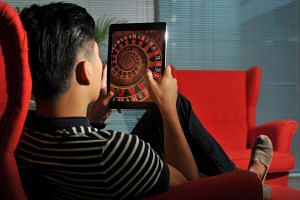 Clubs must do more to curb problem gambling: Experts

Missing the jackpot - and companionship of the clubhouse

Jackpot or fruit machines (FMs), whose numbers rose from 1,600 in 1996 to nearly 1,900 last July, came under the spotlight in April last year following reports on how they were a key income source for many clubs, including football clubs.

In a bid to make jackpot machines become an "ancillary part of a broader suite of social and recreational offerings" for clubs, the MHA announced measures last July which included tighter criteria for jackpot machine permits.

Seven of the 61 clubs did not renew their permits upon expiry last October. Another eight that fell short of the tighter criteria received interim permits but all ended their jackpot machine operations by Monday. Of the remaining 46 that received permits, four ended operations on their own, said MHA.

New rules, such as mandatory self-exclusion orders, are also in place to limit availability and accessibility of these machines.

Mr Billy Lee, founder of non-profit group Blessed Grace Social Services, said exclusion orders are effective although not a cure-all as punters can turn to alternatives like underground gambling dens.

"But the more barriers put across to gambling addicts, the more difficult it is for them to get their gambling fix," he told The Straits Times.