Speaking at a fundraising dinner for the Singapore Association of the Visually Handicapped (SAVH), Mr Heng urged volunteers, companies and donors to forge closer partnerships in building a caring and inclusive society for people with disabilities.

Citing a 2015 National Council of Social Service study, he said that more than a third of respondents reported that they would be hesitant to employ people with disabilities.

"However, the survey also found that public attitudes towards persons with disabilities were better with a higher frequency of contact," Mr Heng said in a speech at the Mandarin Orchard Hotel.

Only an estimated five out of every 100 people with disabilities here are employed, The Straits Times reported last month.

Another way to meet the growing needs is for the SAVH to continue its good work in improving the lives of the visually impaired and to expand its services, Mr Heng said.

The voluntary welfare organisation (VWO), which is celebrating its 68th anniversary this year, provides services such as rehabilitation and training to its 4,000 visually-impaired clients.

Half of its beneficiaries are  61 years old and above, while 70 per cent are at least 51.

Apart from support facilities such as a low vision clinic, which provides devices that can help to maximise a person's remaining vision, the SAVH also helps to train those with visual impairment to move around more freely and independently, said Mr Heng. 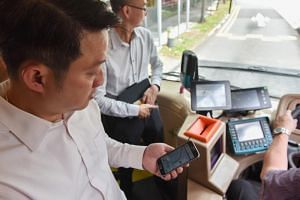 Causes: App to help those with disabilities get around expected to be launched by mid-2019

New workgroups to look at how disabled can live independently, improve employability

Currently, more than 95 per cent of bus stops and public buses in Singapore are wheelchair-accessible, and all public buses are targeted to be so by 2020, he noted.

Apart from individual volunteers, companies can also play their part by engaging actively in corporate social responsibility efforts, such as by supporting SAVH and its clients, said Mr Heng.

The Finance Ministry, for example, regularly engages the services of SAVH's massage team.

"In fact, the masseurs were at my ministry just two days ago to provide their services, as welfare for staff who have worked hard on the Budget," he said.

The Government will also continue to play an enabling role in supporting philanthropy and volunteerism, Mr Heng said.

Under the Bicentenntial Community Fund announced during the recent Budget, for example, dollar-for-dollar matching will be provided for donations made to institutions of a public character in the coming year. This is on top of the existing 250 per cent tax deduction on qualifying donations.

SAVH president Choo Chek Siew said that the VWO has achieved much over the last four years, including the creation of a new skills training centre to increase the employability of its clients and a daycare centre for the  elderly who are visually impaired.

It has also produced four short educational videos on proper guiding techniques for sighted volunteers and family caregivers, which will be aired at public places to help with education efforts.

While more people will face sight issues, many of those who could use the SAVH's services are unaware of them, said Mr Choo.

He added: "We need to improve our reach by expanding and deepening programmes that benefit the visually handicapped."