SINGAPORE - In the final legal chapter of the City Harvest Church (CHC) saga, a five-judge Court of Appeal on Thursday (Feb 1) dismissed a bid by prosecutors to reinstate the original convictions for church founder Kong Hee and five others convicted of misusing millions in church funds, which would have meant longer jail terms for them.

Former fund manager Chew Eng Han, 57, facing a jail term of three years and four months, has been out on bail pending the court's decision.

He was allowed his request to start serving his sentence on Feb 22, after the Chinese New Year holiday.

The decision, which hinged on the interpretation of provisions in the Penal Code governing criminal breach of trust offences, has wider implications for future misappropriation cases.

Judge of Appeal Andrew Phang, in reading the decision, said that if there is any gap in the law, the shaping of the remedy should be left to Parliament.

"A hard case should not be allowed to make bad law," he said, noting that the accused are still serving substantial jail terms. The other judges included Judge of Appeal Judith Prakash, and Justices Belinda Ang, Quentin Loh and Chua Lee Ming.

The court said a review of the law was “not only essential” but also “long overdue”.

In a statement on Thursday afternoon, the Attorney-General’s Chambers said that it would work with relevant government ministries "on the appropriate revisions to the Penal Code, to ensure that company directors and other persons in similar positions of trust and responsibility are subject to appropriate punishments if they commit criminal breach of trust".

The prosecution had raised the point of law to the apex court in August last year, in a rarely invoked procedure known as a criminal reference.

The prosecution argued that the City Harvest six ought to have been convicted of the more aggravated charge of CBT as agents, which provides for heavier punishment, rather than plain CBT.

CoA upholds High Court's decision that the 6 leaders of CHC charged for having conspired to commit the aggravated offence of CBT as agent cannot be convicted of that offence. Read case summary https://t.co/yOUPj7u4Od

The six were originally charged and convicted - after a marathon 142-day trial that started in 2013 - of CBT as agents, under Section 409 of the Penal Code.

They were handed jail terms ranging from 21 months to eight years in November 2015.

The six appealed against their convictions and sentences, while the prosecution appealed for harsher sentences. 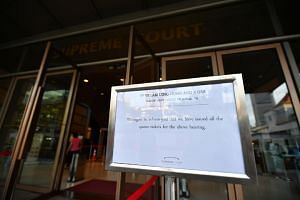 Deciding on the appeals last April, the High Court, in a split 2-1 decision, cleared the six of CBT as agents and found them guilty of plain CBT under Section 406.

Two of the three judges on the panel ruled that Section 409 applies only to "professional agents"; and directors such as the CHC six cannot be considered "agents" under Section 409. This resulted in their sentences being reduced.

On Thursday, the five judges sitting on the Court of Appeal unanimously affirmed the High Court majority’s view.

In a 152-page written judgment, the Court of Appeal said there was a “coherent and well-established line of authority” going back almost two centuries that an “agent” under this provision must be someone who is in the business of providing agency services.

The court acknowledged that, in the modern context, where directors of companies and officers of charities and societies play key roles, “there does not appear to be a good policy reason to ignore their heightened culpability and the enhanced potential for harm were they to commit CBT”.

In the dock, Kong and Tan Ye Peng did not display any emotion on hearing the verdict. Lam and Wee exchanged looks, smiling slightly.

Ms Sharon Tan was teary eyed and hugged supporters as she left the courtroom.

Later, her lawyer, Mr Paul Seah, told reporters that she was very grateful that "the journey is over".

"She is looking forward to being reunited with her family," he added.

Chew said he had no strong feelings over the court's decision as "it came out as we had hoped for".

"It never feels good to come to court," he told reporters.

Mr Kenny Low, husband of Serina Wee, said the family is happy that this saga is finally coming to a closure".

"Now I can tell the kids a date that mummy is coming home," he said.

Some church members came out teary-eyed while others embraced one another.

A 40-year-old female church member, who declined to be named, said: "We are really relieved and happy."

Earlier on Thursday, a queue to attend the final verdict of the City Harvest Church case in the apex court had started at 3.30am. By 7am, close to 60 people had joined the queue, despite many being told that all entry passes had been given out.

"We are praying that this verdict will be favourable. The jail term is too harsh. God-willing, it should not be lengthened and they should be set free," she said.

She added that service in the church has been going on as usual and members have been praying consistently for their pastors.

Queue outside Supreme Court for the City Harvest Church case

Housewife Shirley Tan, 65, was visibly upset when she arrived at 6.15am and could not obtain a pass to enter as they had all already been given out.

She had turned up at the State Courts at 5.30am only to realise she was at the wrong location.

"I want to see Pastor Kong. I love him so much. City Harvest Church is my second home," she said.