The potential issues cited by Mr Kausikan, who chairs the National University of Singapore's Middle East Institute, include growing regional rivalries, anti-Chinese sentiment in certain countries and China's relative inexperience in dealing with the Middle East.

"Singaporeans have, by and large, a very romantic view of China... that everything it touches turns to gold," he said. At the same time, they generally look at the Middle East through the lens of religion, which is "far too narrow", he added.

In his view, whether China's involvement is successful or runs into trouble - "and I don't think it's a binary choice" - the outcome will impact China and, therefore, this part of the world, he said.

Mr Kausikan was speaking to reporters ahead of a two-day conference on China's BRI in the Middle East. The conference next month is organised by his institute.

Other speakers will discuss topics such as infrastructure development, China's policy towards Muslims in Xinjiang and the broader geopolitical context.

NOT A STRATEGY FOR NOW

It is not a strategy; it is right now very largely a collection of projects. We should see it in a balanced way. It is certainly not a substitute for the current American-led international order.

RETIRED DIPLOMAT BILAHARI KAUSIKAN, about the Belt and Road Initiative which, while "potentially game-changing", is still a vision.

The BRI is an ambitious development strategy by Chinese President Xi Jinping to revive ancient land and sea trade routes linking Europe, Africa and Asia. It involves large-scale infrastructural project such as building of ports, railways and roads in many countries along the routes, including those in the Middle East, such as Saudi Arabia.

But the BRI, while "potentially game-changing", is still a vision, Mr Kausikan said.

"It is not a strategy; it is right now very largely a collection of projects," he said. "We should see it in a balanced way. It is certainly not a substitute for the current American-led international order."

He highlighted several issues that could be stumbling blocks for China in the Middle East, one of which is growing scepticism in some countries of China's intentions. 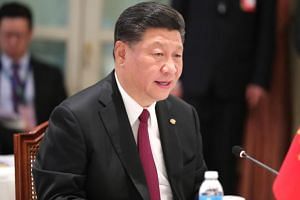 China could also find itself caught between growing regional rivalries, Mr Kausikan said. This is especially since China is selling "fairly sophisticated" arms that could tip the balance of power in the region.

Another issue that could derail China's strategy in the Middle East is its treatment of Muslims in Xinjiang, which may not be sustainable, Mr Kausikan added.

The conference is free and open to the public, who may register on the Middle East Institute's website.

It will take place at Goodwood Park Hotel on Feb 11 and 12.