It was a day of pointing fingers at the Shangri-La Dialogue on Saturday (June 2).

Then, the head of the Chinese delegation slammed the United States for "disinviting" his country from the Rim of the Pacific (Rimpac) multinational naval games exercise, due to take place later this month.

Lieutenant-General He Lei, who is deputy president at the People's Liberation Army's Academy of Military Science, said Washington had hyped up militarisation and that the move was not constructive.

He asserted that the islands belonged to China and that Beijing was acting to defend the country's sovereignty.

At another discussion, Senior Colonel Zhou Bo, a director at the Security Cooperation Centre of the Office for International Military Cooperation at China's Central Military Commission, emphasised the importance of stable Sino-US relations.

US accuses China of intimidating neighbours

The Asia-Pacific can enjoy stability only when Sino-US relations remain stable, he said.

But while China has spoken highly of the progress in crisis management between the two sides in recent years, it has also noticed that the US has been ramping up not just reconnaissance against China, but also military activities in the South China Sea, he told the audience.

Elsewhere, at the Shangri-La Hotel, the venue for the dialogue, other Chinese officials spoke in support of Beijing's views on the South China Sea. They pointed to concerted efforts by China to clear its position on the disputed waters. 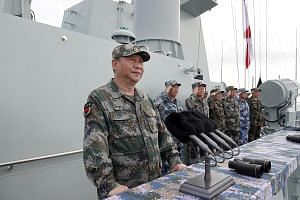 How not to think about geopolitics in East Asia

China rejects US accusations it seeks hegemony in Asia

The country, however, has not sent a very high-level delegation to the annual talks.

"Rimpac is a symbol of US-China military trust," Lt-Gen He said, maintaining that both countries should respect each other and meet each other halfway.

The biennial naval exercise, known as the world's largest global maritime exercise, will see participation from 26 countries, with Brazil, Israel, Sri Lanka and Vietnam involved for the first time.

It will be held from June 27 to Aug 2, in and around the Hawaiian Islands and Southern California.

Washington's moves were in contradiction of its stated position that it does not take sides, Lt-Gen He told an audience that included defence ministers, security officials, diplomats and observers.

Asked to comment on the deployment of missiles on islands in the South China Sea, Lt-Gen He said: "All islands are part of China's territories and we have historical records that are recognised by international law.

"It is undeniable that... there are soldiers that are stationed there and there are weapons that are deployed there. It is a symbol of China's sovereignty...

"The weapons have been deployed for national defence."

Lt-Gen He said China has not obstructed any military vessels following international laws and was open to discussions on the interpretation of freedom of navigation.