SINGAPORE - China may still be decades away from becoming a fully developed advanced country, but it cannot wait decades before taking on larger responsibilities, Prime Minister Lee Hsien Loong said on Friday (May 31).

Other countries, including the United States, must also adjust to China's larger role and accept that the country will continue to grow and that it is neither possible nor wise to prevent this from happening, he said.

In an hour-long speech to defence ministers and military chiefs at the Shangri-La Dialogue, PM Lee noted that China's growth has shifted the strategic balance and the economic centre of gravity of the world, and the shift continues.

"Both China and the rest of the world have to adapt to this new reality," he said.

He added: "China has to recognise that it is in a totally new situation created by its own success. China can no longer expect to be treated the same way as in the past when it was much smaller and weaker."

Having gained much from the international system, China now has a substantial stake in upholding it and making the system work for the global community, he said.

Chinese leaders have spoken up strongly in support of globalisation and a rules-based international order.

"China must now convince other countries through its actions that it does not take a transactional and mercantilist approach, but rather an enlightened and inclusive view of its long- term interests," he said.

For example, when China joined the World Trade Organisation (WTO) in 2001, its merchandise trade accounted for only 4 per cent of world trade. This has since tripled to 11.8 per cent.

"This is why the trade arrangements and concessions that China negotiated when it joined the WTO are no longer politically wearable for other countries," he said. 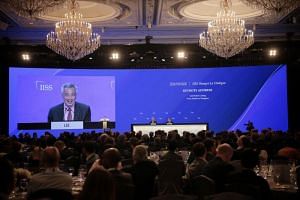 China is classified as a developing country at the Geneva-based institution, which allows it to provide subsidies in agriculture and set higher barriers to market entry than more developed economies. The United States has asked for countries like China to pare down such privileges several times.

On Friday, PM Lee said: "It is in China's own interest to prevent the international framework of trade from breaking down, and to implement timely changes that bring about greater reciprocity and parity with its trading partners, and that are more consistent with present-day China's more advanced state of development."

A similar shift has taken place in how the behaviour of China, now a major power with the world's second-largest defence budget, is viewed in the security arena.

PM Lee said it is natural for China to want to develop modern and capable armed forces to protect its territories and trade routes, as well as aspire to become not just a continental but also a maritime power.

"At the same time, to grow its international influence beyond hard power and military strength, China needs to wield this strength with restraint and legitimacy," he added.

He noted that frictions between China and other countries would arise from time to time. Citing overlapping maritime claims in the South China Sea, PM Lee said China should resolve these disputes peacefully in accordance with international law, including the United Nations Convention on the Law of the Sea.

"It should do so through diplomacy and compromise rather than force or the threat of force, while giving weight to the core interests and rights of other countries," he said.

"Then over time, it will build its reputation as a responsible and benevolent power that need not be feared. Instead, China will be respected as a power that can be relied on to support a stable and peaceful region."

The rest of the world must also adjust to a larger role for China, said PM Lee.

"Countries have to accept that China will continue to grow and strengthen, and that it is neither possible nor wise for them to prevent this from happening," he said.

He added that as a major stakeholder in the international system, China should be encouraged to play commensurate and constructive roles in global institutions like the WTO: "If China cannot do so, it will create its own alternatives."

PM Lee said that the US, being the pre-eminent power, would have "the most difficult adjustment to make".

"But however difficult the task, it is well worth the US forging a new understanding that will integrate China's aspirations within the current system of rules and norms," he said.

New international rules would have to be made in many areas, including trade and intellectual property, cyber security and social media.

"China will expect a say in this process, because it sees the present rules as having been created in the past without its participation. This is a reasonable expectation," said PM Lee.

He stressed that both Washington and Beijing must work together, as well as with other countries, "to bring the global system up to date, and to not upend the system".

He also noted that stresses have built up between the two major powers over issues like cyber espionage, 5G technology, freedom of navigation and human rights. This is especially so in trade, where the two countries have reached an impasse.

"If both sides treat their trade dispute purely on its own merits, I have no doubt their trade negotiators, who are highly competent, will be able to resolve it," he said.

"But if either side uses trade rules to keep the other down, or one side comes to the conclusion that the other is trying to do this, then the dispute will not be resolved, and the consequences will be far graver than a loss of GDP (gross domestic product). The broader bilateral relationship will be contaminated."

Other areas will inevitably be affected, including investments, technology and people-to-people relations, he said. "Every action taken by one side will be seen as a direct challenge to the other, and will elicit a counter-action. We will all be headed for a more divided and troubled world."