SINGAPORE (AFP) - An Asean-led bid to complete the world's largest trade deal - without the United States - was pushed back to 2019 after Asia-Pacific trade ministers failed to agree on key terms at a Singapore summit.

The Regional Comprehensive Economic Partnership (RCEP), covering half the world's population, is billed as an antidote to President Donald Trump's "America First" agenda, which has seen tariffs imposed on almost half of all Chinese imports to the US - and retaliatory levies by Beijing.

Chinese Premier Li Keqiang, who is attending a Singapore summit to rally support for the deal, said he hoped the RCEP would be signed and implemented next year.

"It (RCEP) is going to deliver real benefits to the people of our region," he said in an address on Tuesday (Nov 13).

China is now the standard bearer of global free trade, he added, with the RCEP - a sweeping 16-country deal that includes China, Japan, India and the 10 members of Asean - at the heart of its strategy.

"It's going to send a message to the international community that we stand by free trade... with rising protectionism and strains on free trade, we need to advance the RCEP negotiations," Mr Li said.

He conceded that the Chinese economy was facing "challenges" in the wake of the trade war with the US, but insisted strong fundamentals meant radical intervention was not the remedy.

"Despite downward pressures, we will not resort to massive stimulus," Mr Li said.

"But we are very happy with that and is heading in the right direction."

India's concerns over opening its markets to competition, in particular from Chinese firms, has been a key sticking point in the several years of negotiations. 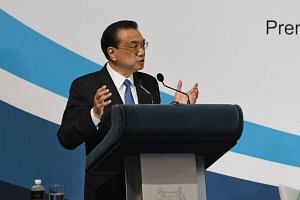 China has conditions to 'energise' market, will continue to open up: Premier Li Keqiang

But New Delhi's delegation welcomed the incremental steps towards establishing the trade agreement.

"The future lies in RCEP," Indian Trade Minister Suresh Prabhu told reporters, but urged a patient approach to talks to ensure "every country will benefit from it".

Several general elections scheduled in early 2019 - including in India, Thailand and Indonesia - have complicated the time-frame of a deal that will open markets in countries covering nearly half the world's gross domestic product (GDP).

A draft leaders' statement on the RCEP seen by AFP noted the urgency of reaching an agreement "given the current headwinds faced by the global economy".

RCEP was given extra impetus after Mr Trump pulled the US out of the rival Trans-Pacific Partnership (TPP).

The TPP is still alive even without Washington, but RCEP is now the world's biggest trade deal.

However, the pact is much less ambitious than the TPP in areas such as employment and environmental protection.

The Asean Summit, which formally opened on Tuesday (Nov 13) afternoon, is expected to sweep in trade, maritime disputes and the Rohingya crisis.

Key world leaders including China's Mr Li, Russian President Vladimir Putin and Mr Mike Pence - Mr Trump's No 2 - are also in Singapore for talks foreshadowed by the China-US trade war and its ripple effect on global economies, particularly in Asia.

Mr Pence is also expected to keep pressure on Beijing over its growing aggression in the South China Sea while seeking support for Washington's approach to the denuclearisation of the Korean peninsula.

Myanmar's de facto leader Aung San Suu Kyi is also in Singapore and is likely to face intense scrutiny over her country's treatment of the Rohingyas, particularly from Muslim-majority nations at the summit.

Amnesty International on Monday stripped Ms Suu Kyi of its highest honour, citing her "indifference" to the atrocities committed by Myanmar's army against the minority ethnic group.