In a statement yesterday, the Ministry of Manpower (MOM) said that Chemical Industries (Far East) had pleaded guilty to a charge under the Workplace Safety and Health Act for failing to take reasonable measures to ensure the safety and health of the people involved.

An MOM spokesman told The Straits Times last night that the company pleaded guilty in court on Sept 14 and was fined the same day.

The incident involved a chlorine leak in a cylinder stored in Chemical Industries' Jalan Samulun chlorine storage facility in Tuas.

The leak triggered an alarm from one of the facility's chlorine detectors and a worker activated the chlorine gas emergency scrubber and exhaust system. Two workers donned protective equipment and attempted to stop the leak but were unsuccessful. Chemical Industries then called the Singapore Civil Defence Force (SCDF) for help at around 9.20am.

Three fire engines, four hazardous materials vehicles, three ambulances and two support vehicles were dispatched to the scene. A specialist team plugged the source of the leak, while another team used three water jets to dilute the chlorine vapour in the air.

Operations ended at noon on the same day. 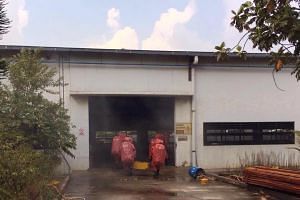 SBS Transit diverted bus service 249 for about 1½ hours because of the chemical leak and workers in the area were also evacuated.

Two SCDF officers and five members of the public outside the workplace were momentarily exposed to the leaked chlorine gas, which is corrosive.

They experienced problems ranging from eye irritation to difficulties in breathing, and were taken to Ng Teng Fong General Hospital before being discharged on the same day.

MOM investigations revealed that the company had failed to maintain the integrity of the plug of the container in which the chlorine was stored. The plug was severely corroded, which resulted in the leak.

MOM added that on the day of the leak, the container should have been rolled so that the leaking plug would be positioned at the top.

This would have converted the liquid leak to a gas leak and slowed the rate of the leak significantly to allow responders to approach the container and seal the corroded connection to stop the leak.

The multiple safety breaches showed a clear disregard of the hazards at the workplace and had posed a safety risk to the public. The MOM will not hesitate to prosecute companies that flout safety regulations.

However, when the incident occurred, the worker who responded could not roll the leaking container tank as it was stored among many other containers, with no space to manoeuvre it properly.

Chemical Industries neither installed its emergency scrubber and exhaust system according to design, nor maintained a safe air change rate in its workplace, MOM said.

Investigations also found that the rate at which the contaminated air was extracted did not meet general ventilation standards.

MOM's major hazards department director Go Heng Huat said: "The multiple safety breaches showed a clear disregard of the hazards at the workplace and had posed a safety risk to the public. The MOM will not hesitate to prosecute companies that flout safety regulations."