SINGAPORE - The Commissioner of Charities is coming up with a set of guidelines for commercial fund-raisers so that donors can give without feeling undue pressure.

To be called Code for Commercial Fund-Raisers, it will be co-developed with major commercial fund-raisers here, said Ms Fu at the Charity Transparency and Governance Awards held at Gardens by the Bay.

It will state three core principles in commercial fund-raising - legitimacy, accountability and transparency, she added.

A spokesman for the Charities Commissioner said the code will guide the fund-raisers on their responsibilities and conduct, so that "donors can give confidently and willingly with no undue pressure".

The co-development of the code is similar to that of the Code of Practice for Online Charitable Fund-Raising appeals, which was launched in January this year to help ensure appeals on crowd-funding sites are genuine and that fund-raisers are accountable for the donations received. 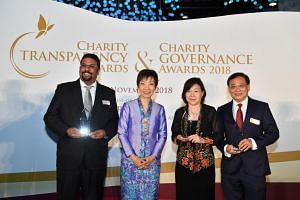 No launch date has been given for the new code but it will be made public soon, said the spokesman.

The new code was welcomed by people in the charity sector, who said some of those soliciting for donations on the streets can be very pushy.

Mr Alfred Tan, chief executive of the Singapore Children's Society, which does not hire commercial fund-raisers, is wary of the cut these fund-raisers take.

"This may be seen as being overly commercialised or profiteering," Mr Tan said.

Housewife Angelina Ong, 42, who has given to charities through commercial fund-raisers, said that, when asked, many do not disclose the commission they get.

"It's an ethical question as donors hope that as much as possible of their donation dollar will go to the charity's beneficiaries," she added.

Charity Council chairman Gerard Ee said the code will give all commercial fund-raisers a common framework for their conduct and practices, so that everyone will know "what is the right thing to do".

Meanwhile, a total of 47 charities won the Charity Transparency Award on Thursday, an increase from 41 last year and 35 in 2016, when the awards were first given out.

The steady rise shows more charities are becoming increasingly aware of the importance of transparency and accountability, said a spokesman for the Charity Council, which organised the awards.

Some of the winners include large and well-known charities such as Ren Ci Hospital, the National Kidney Foundation and the Singapore Children's Society. Others are medium-sized and smaller groups such as the Singapore Association for Mental Health, Viriya Community Services and Art Outreach Singapore.

All registered charities are automatically assessed when they meet the award's eligibility criteria. This includes being in operation here for at least three years and having a gross annual income of not less than $50,000 in the preceding financial year.

The Charity Council said about 800 charities were assessed for the Charity Transparency Award this year and 47 were honoured.

Underlining the importance of accountability, Ms Fu said: "It is necessary for all charities to be transparent and accountable to our public, so that we can collectively uphold as a sector the trust the public placed on us."