He is an avid dog lover who is working as an auxiliary police officer with Certis Cisco.

When the chance came for Mr Chan Yubo, 23, to mix both his career and interest, he responded quickly.

He is one of the first nine dog handlers in Certis Cisco's new K-9 unit, which was launched yesterday at the Certis Cisco Centre in Paya Lebar.

These include airports, sea ports, transport hubs and major events where human traffic is high.

Mr Chan, an auxiliary police officer for almost five years, said: "I really love dogs. I have a small chihuahua at home. When I heard of this opportunity, I decided to join immediately."

He was paired with Thomas, a labrador retriever, when he joined the unit in September last year. He said: "Thomas has a lot of patience and we get along perfectly. There's time for work and also for play. He especially likes his squishy ball." 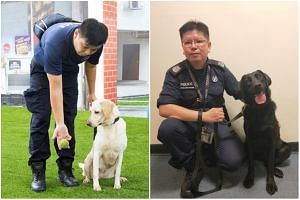 On the ground to sniff out trouble

Certis, a security organisation which delivers multi-disciplinary security and integrated services, will start with 10 dogs.

One dog is currently undergoing explosives detection training in Britain.

The dogs are of various breeds, such as labrador retrievers and english springer spaniels, and aged between one and 1½ years.

They will be in service until they are retired at about eight years old, after which they will be put up for adoption. This procedure is similar to their counterparts in the Singapore Police Force (SPF).

The dogs are brought in from Britain and the Netherlands, and undergo the same training as their SPF counterparts.

Mr Matthew Ng, commanding officer of the enforcement and events division of the Certis auxiliary police force, said the K-9 unit was formed to counter the heightened security threat here.

He said: "Dogs are extremely intelligent and certain breeds can be trained to detect contraband and explosives."

The dogs, he said, will be assigned to tasks such as cargo screening and deterrence patrols.

He added that canines may sometimes be better than humans or machines in carrying out screening work.

For example, a team of two officers would take 20 to 30 minutes to thoroughly check a vehicle, using equipment such as undercarriage mirrors. But a dog can complete the task in just five to 10 minutes, according to Mr Ng.

Certis plans to eventually increase the team of dogs to 24, although there is no timeline, as it would depend on market requirements.

A new kennel is being built for the Certis K-9 unit in Toh Tuck Crescent, and it will have grooming and training facilities. It is expected to be completed between June and September.