Ten patients who faced almost certain death from an aggressive form of cancer have a new lease of life after undergoing experimental treatment to boost their immune systems.

The patients, who have acute lymphoblastic leukaemia, had exhausted standard forms of treatment such as chemotherapy and bone marrow transplants, without success.

Their last ray of hope came in the form of CAR-T cell immunotherapy, which involves drawing immune cells from a patient's blood and equipping each with a Chimeric Antigen Receptor (CAR) - a receptor which binds itself to a specific protein on the cancer cells. This enables the immune cells to track down cancer cells and kill them.

The treatment was developed by Professor Dario Campana, an expert in advanced cellular therapy at the National University of Singapore's Yong Loo Lin School of Medicine.

He also developed the technology to harvest a large number of CAR-T cells in the laboratory so that they could be infused into the patients' bodies during treatment.

The 10 patients, aged between four and 28, have responded well to the treatment, which took place at the National University Hospital between March last year and April this year. Eight are in remission.

Next January, Prof Campana and his team will start therapy trials for 100 patients over a period of five to 10 years. 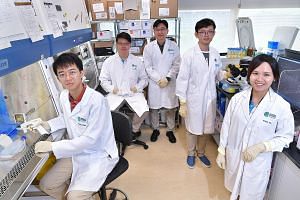 The expanded trials will be another step in the direction of providing personalised treatment for cancer patients. The team will also examine ways to apply the treatment to other types of cancers.

In May this year, Prof Campana was conferred the Jacob and Louise Gabbay Award in Biotechnology and Medicine for his work in CAR-T cell therapy.

"For the first time, without needing to go to the US, Singaporeans with relapsed or resistant acute lymphoblastic leukaemia that was previously considered incurable can now receive such life-saving treatment in Singapore."