SINGAPORE - The Cathedral of Good Shepherd was once again filled with the voices of Catholics singing hymns and music from its restored 1912 Bevington and Sons organ, Singapore's oldest-working pipe organ, on Sunday (Nov 20).

The 173-year-old building played host to hundreds of worshippers in a mass led by Archbishop William Goh.

In his address, the archbishop acknowledged the contributions of the cathedral's former rector Father Adrian Anthony, the priest who started and led the restoration effort from the get-go, and Monsignor Philip Heng, who saw it through after the former fell ill. 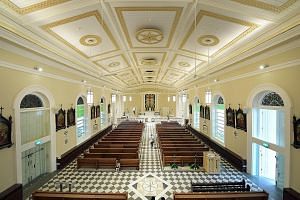 Restored Cathedral of the Good Shepherd a feast for the eyes

Archbishop Goh said: "Many people have contributed to restore this church - (the) rich, poor, influential, with all kinds of resources. To restore the church was truly a very daunting challenge that we had to face."

The cathedral initially struggled to raise money for its $40 million restoration. Eventually, funds started streaming in following efforts from within the archdiocese.

Highlights of the project include a new floor, restored windows, air-conditioning, and a new foundation for the national monument.

Underground works in the vicinity, such as the construction of the Circle Line and Singapore Management University, had caused its original underground boulders to shift.

This led to the uneven settlement of the building, with cracks forming across the building.

The mass today also included the laying of a time capsule and commemorative stone by the archbishop.

The capsule included a book on the cathedral's history, commemorative SG50 coins, and newspaper articles, including those from The Straits Times on the progress of the restoration and the discovery of a time capsule from 1843

Devotee Mr Fredrick Gomes, 82, who has been attending the cathedral since he was a child, said that the experience has improved. "The music and the choir was especially majestic. It was a wonderful mass."