SINGAPORE - An alleged case of child abuse at a Sparkletots childcare centre in Teck Whye is being investigated, PAP Community Foundation (PCF) said on Thursday (Feb 16).

A parent had claimed that she found bruises on her 18-month-old toddler's forehead, back and legs.

"I did not think much of it at the start but grew concerned as he came back with a new bruise each day," she said.

Worried, she stayed back one day to observe, she said.

"I saw my son, held by his ankles by the teacher, was struggling as he was pressed down by the teacher's elbow on his back," she wrote.

Facebook user Mel Da withdrew her child from the centre at Block 19, Teck Whye Lane after just one week, she wrote in Facebook group 'Childcare in Singapore'. 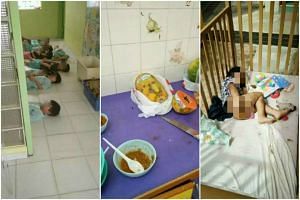 She added that closed circuit television footage confirmed what happened, and the principal apologised. However, the next day, she found another bruise on her son's stomach.

Both the parent and the principal of PCF Sparkletots Preschool declined to comment when contacted as the matter is being investigated.

PCF, which manages Sparkletots preschools, said it takes a "serious view of this incident".

"We have conducted our investigation and reported this matter to the relevant authorities. We are now assisting with their on-going investigations," a spokesman said.

They are engaging the parent, they added.

"We assure all parents that the safety and well-being of the children under our care are our top priorities," the spokesman added.

"Whilst we support our staff in their challenging jobs as educators, we also emphasise that we do not condone any breach of professional standards and will take the necessary actions if required."