Singaporeans from all walks of life celebrated the country's 54th birthday yesterday with events across the island.

Besides singing the National Anthem and reciting the Pledge at National Day observance ceremonies, residents were entertained with the likes of drone-flying, art installations and fireworks displays.

About 3,000 residents from the Moulmein-Cairnhill constituency attended the observance ceremony at Farrer Park Field, the former site of Singapore's first race course.

A drone workshop, where participants tried their hand at flying the devices, and traditional food stalls were a hit.

An aquathlon, which saw around 250 participants aged between six and 55, was also held.

Resident Lynn Ong, 36, who is self-employed, was at Farrer Park Field with her husband and two children. She said: "It is good fun for the kids as they get to try out things like flying drones."

Mr Ghazali Syed, 43, who grew up in the neighbourhood, took his four children to the event.

"We come for the National Day celebrations every year, and the kids enjoy the fun games and food stalls at the carnival," he said. 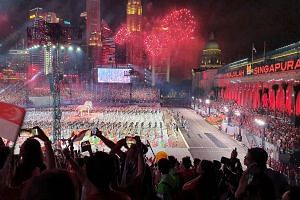 The event was attended by Minister in the Prime Minister's Office Indranee Rajah, who is also adviser to Tanjong Pagar GRC and Radin Mas SMC grassroots organisations, as well as Mr Koo Tsai Kee, who is the second adviser and a former Tanjong Pagar GRC MP.

"Our whole history has been about facing challenges, overcoming them, going on to the next chapter and building a new fu-ture for the next generation," said Ms Indranee.

"Going forward, we have hope for the future. Despite all the challenges that are ahead of us, we are a people that can overcome them."

National Day celebrations also rang out in other parts of Singapore.

In Tampines, around 100,000 residents and visitors participated in activities such as face painting and balloon sculpting, and were treated to fireworks and wave flame displays, as well as the live broadcast of the National Day Parade at Our Tampines Hub.

A live screening of the parade was also held in Yishun and attended by some 2,000 residents.

Light displays and art installations were also part of the ce-lebration there that was atten-ded by Law and Home Affairs Minister and Nee Soon GRC MP K. Shanmugam.

Over at 5 Kadayanallur Street, the former site of St Andrew's Mission Hospital was decked out in Singapore-inspired art installations and transformed for National Day celebrations.

The event at the architectural landmark included musical performances by local artists, craft workshops and an art market where local designers showcased their handmade wares.