SINGAPORE - Retiree Margaret Yeo is used to being woken up by her mother in the middle of the night.

The 92-year-old dementia sufferer is prone to asking her daughter - and carer for several decades - about what they are doing the next day and what time they need to get up.

"Initially, I answer her questions," said Madam Yeo, 71, a former administrative officer. "After a while, I'll just tell her, 'It's one o'clock now - time to sleep.'"

Senior Minister of State for Health Mr Edwin Tong announced last Wednesday (Feb 13) that the Agency for Integrated Care (AIC) will pilot a new night respite service at care homes for seniors with dementia who suffer from sleep and behavioural issues.

Although many details about the programme are still to be revealed, the initiative will see them take part in cognitive activities such as arts and craft and simple puzzles at night to help manage their behavioural and sleep issues, while their caregivers catch up on sleep.

The pilot is expected to start in the second half of this year.

"Caregiving can take its toll," Mr Tong told Parliament, adding how carers often suffer from a lack of sleep.

Madam Yeo shares a room with her mother, Madam Ng Guan Cheng, in her three-bedroom Housing and Urban Development Company flat in Marine Parade, where they live with Madam Yeo's husband and her 40-year-old son.

Caring for her mother has become tougher since she developed dementia. Madam Ng needs assistance with bathing and often requires a wheelchair to get around. 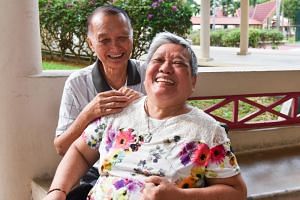 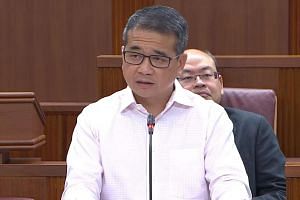 Caregiver allowance, assisted living options among suggestions by MPs in debate on ageing

"Because of dementia, she sleeps very little," said Madam Yeo. "She also forgets the things she has done, or whom she has met. Immediately after a meal she can't remember what she ate. Sometimes, she refuses to eat and we have to force her to eat."

Madam Yeo is afraid of leaving her mother alone in case she falls.

"Sometimes we see bruises on her, or she tells us that she hurt herself. But she cannot recall where she fell or what happened. That's why somebody must always be around. "

Madam Yeo also has to contend with her own dialysis sessions which last four hours, three times a week - after which caring for her mother can be even more trying.

Madam Ng Guan Cheng attends a day care centre from 8am to 4pm on weekdays, where she takes part in simple exercises. But the centre does not operate at night.

Madam Yeo, who does not have space at home for a domestic worker, believes the pilot scheme will be a big help, as long as the nursing home is nearby.

"If it's too far from my place, it would defeat the purpose because it would be inconvenient," she said.

Mr Tong also stated that a new enrolment system will allow caregivers who could need general respite services to register their loved ones and complete some of the administrative processes in advance, so that less activation time is required when the time comes to use those services.

St Luke's ElderCare is aiming to launch the enrolment system during the first quarter of this year.

Its chief executive Dr Kenny Tan said: "One of our aims is for enrolment turnaround time to be less than a week, where previously the process would be longer. With this service, we hope to introduce more flexibility as caregivers will be able to use the service on a more ad-hoc basis."

Madam Yeo, who has heard of cases of caregivers who suffer from burnout, emphasises the importance of self-care for caregivers. She said: "In order to give proper care to your loved ones, you need to look after yourself first. "