Workers who care for the elderly in nursing homes, daycare centres and at home are paid a lot less than their peers in other countries with similarly ageing populations.

Their pay is also lower than those in other jobs in Singapore that require similar educational qualifications, such as receptionists and sales assistants.

The low pay, coupled with a high turnover rate, could make it difficult for Singapore to meet its target of growing the long-term care workforce by 45 per cent between 2017 and 2020, said a report released yesterday by philanthropic organisation Lien Foundation.

"Despite concerted efforts to raise pay, redesign jobs and improve skills and productivity, the sector seems afflicted by constant churn," the report added.

Singapore ranks lowest among them on wages for long-term care workers - despite its median wage across all occupations in the economy being second only to Australia.

Despite concerted efforts to raise pay, redesign jobs and improve skills and productivity, the sector seems afflicted by constant churn.

While wages in the sector have risen by one-third since 2012, salaries for local and foreign workers lag behind other jobs requiring similar qualifications. Receptionists earn $1,000 more than nursing aides, who help the elderly with activities such as eating and bathing.

Low wages could account for higher turnover rates, which are double those in hospitals, the report said, with workers in the sector staying with employers for 3.4 years on average. Higher wages in other countries could be drawing talent away from Singapore, it said.

Of the five economies, Singapore relies most on foreigners, who make up 70 per cent of such workers here, compared with 32 per cent in Australia and below 10 per cent in Japan, Hong Kong and South Korea.

One way to raise salaries is to introduce a Progressive Wage Model (PWM) for the sector, which should cover foreign workers too, said Ms Radha Basu, director of research and advocacy at Lien Foundation. A PWM is a wage ladder that specifies higher pay for workers as they upgrade their skills.

The report also suggested changes to recruitment, like cutting out agents when hiring foreigners. 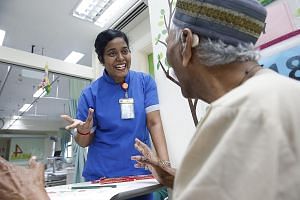 Training and productivity boost to lift wages of staff

Ms K. Thanaletchimi, president of the Healthcare Services Employees' Union, was not surprised by the findings. "The sector has been stagnating in creating a skills ladder and redesigning jobs," she said.

She suggested setting up an association to set guidelines and standards, like benchmarks for wages.

In response to queries, a MOH spokesman said that the ministry is on track to meet projected manpower needs in 2020 and it will press on with efforts to recruit and retain manpower in the sector.