SINGAPORE (THE NEW PAPER) - An SMRT taxi driver who blacked out and hit a group of pedestrians, killing a woman, had no recollection of the accident after he woke up.

The 72-year-old cabby and two injured women, aged 66 and 32, were taken to National University Hospital after the accident at the junction of Queensway and Alexandra Road on Friday evening (March 22), the police said.

The older woman later died from her injuries. She was identified by Chinese-language evening dailies yesterday as Madam Teng, a cleaner.

When the driver woke up in hospital, he had no idea he had been in an accident and that a woman had died, his son told Shin Min Daily News on Saturday night.

The son, who declined to be named, said the family has not had the chance to tell his father about the death.

The police said on Friday they were alerted at about 7pm and preliminary investigations revealed the cabby, who has not been named, had lost consciousness before the accident. He is assisting in police investigations.

Footage from an in-car camera posted on Facebook page SG Road Vigilante shows the taxi, with its hazard lights turned on, veering slowly from its lane to the right-turn lane nearest the central divider on Queensway.

Just as it is about to hit the rear of a car that had stopped for a red light, it suddenly speeds up to cut back to its original lane and beats the red light to turn right to Alexandra Road as oncoming vehicles slow down to avoid hitting it.

The taxi then hits pedestrians who are crossing at a traffic light before stopping.

It is not clear who was controlling the taxi, which The New Paper understands was occupied by passengers at the time.

The driver's son told Shin Min that the family was unaware of his father having any health problems. Even if he did, they had few opportunities to talk to him about it because he worked late nights.

"After the accident, we learnt from the doctor that my father could have problems with his liver and stomach that could cause low blood pressure and make him faint, " he added.

"But this is still under investigation and I have to wait for the results." 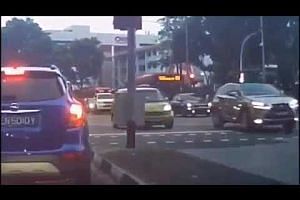 SMRT Taxis and Private Hire Services managing director Heng Yew Teck, who visited the cabby in NUH, told Lianhe Zaobao that he was conscious and able to speak.

He also hoped the driver, who has been with SMRT for 22 years, would have a speedy recovery.

The driver's son said his father had never been in a serious accident during his years as a cabby.

He added that his father wanted to visit the injured woman in the hospital but medical staff had advised against it as his condition was not yet stable.

Two road safety experts called for more regular and stringent health checks on ageing commercial drivers. They added that drivers can also do their part by not working over-long hours to avoid exhaustion and loss of concentration.

SMRT corporate communications vice-president Margaret Teo said SMRT was saddened by Madam Teng's death, and its priority was to get "in touch with the affected families to render assistance and support".

Madam Teng's older daughter, who gave her name as Ms Lim, 33, said her mother was a quiet person who showed her love in actions, not words.

She told Shin Min that her father, 64, was devastated at the loss after more than 40 years of marriage.

"She was considerate and gentle with my father and often brought food to him," she added.

"We are tired and just want to spend some time together to mourn our loss," she said.