Many retailers and restaurants across Singapore were unable to process cashless payments or take phone calls for about two hours during the dinner rush on Thursday due to a Singtel fixed line outage.

The first complaints surfaced at around 5.50pm, prompting Singtel to put up a Facebook post acknowledging the issue.

The problem was fixed about two hours later. Singtel said in an update that "all fixed voice issues have been resolved as of 7.43pm".

In a statement issued late Thursday night, a Singtel spokesman said some residential and business customers experienced issues with their fixed line telephony services from about 5.36pm.

"Our engineers resolved the hardware failure and restored the service at 7.43pm. We apologise for the inconvenience caused."

By then, outage monitoring website Downdetector had received hundreds of reports from affected businesses which had lost connections.

Restaurant-goers and retailers alike said that payments could not be made using Nets or credit and debit cards.

Business manager Ben Tan, 46, said he could not use his cards at Fatboy's The Burger Bar in Upper Thomson Road. 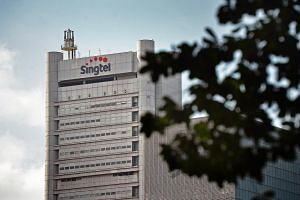 "The staff told me that I could leave without paying but they had to settle the shortfall at the end of the day. It was lucky that I had cash on me," he said.

A Facebook user with the name Sharon Goh wrote: "We are still in operation, customers are upset, they can't pay by Nets, credit card, all upside down now. Please fix the line now."

Another Facebook user with the online moniker Khaiwoon Kim wrote: "We are running a business and we cannot do Nets/credit card transactions!!"

Some restaurant owners could not take phone reservations due to the fixed line outage.