SINGAPORE - Many customers turned up at the Standard Chartered Bank branch in Holland Village on Friday (July 8) morning to do their banking, a day after a brazen robbery took place there.

A number of these customers, unfazed by the daring heist, arrived before the bank counters opened at 10am.

Retiree Daniel Liu, who is in his 60s, said he did not think another robbery would happen.

"Singapore is very safe and has a good reputation," he said.

The robbery took place at about 11.25am on Thursday (July 7), when restaurants were busy with the lunchtime crowd. 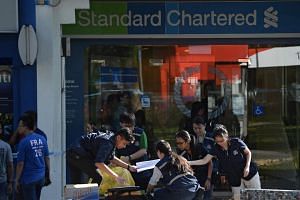 Suspect on the run after $30k bank robbery in Holland Village

The Straits Times understands that the Caucasian suspect strode into the bank and handed a female teller a slip of paper with his demands.

After she complied, he made off with about $30,000 cash on foot. No weapon was seen during the incident, which was over in minutes. The suspect remains at large.

There was no security guard present at the bank then.

But it appears additional security measures have been put in place on Friday.

When the bank opened at 10am, there was a Certis Cisco security guard stationed near the entrance.

"If there was a security guard present yesterday it would've made a difference," said another bank customer Willy Lau, 43, who is self-employed.