For 12 minutes on Tuesday, an SBS Transit bus driver was berated and then beaten up by a passenger who boarded the bus without wearing a mask.

SBS Transit detailed the assault in a Facebook post yesterday, saying that it happened at about 2.45pm, when a 52-year-old male commuter boarded service 21 at Pasir Ris Drive 6 without a mask.

The man, who put on his mask only later, hurled vulgarities at the 39-year-old bus driver, and this continued for the duration of two bus stops.

He began to physically abuse the bus driver after the driver stopped the bus in front of Block 210 at Pasir Ris Drive 1 to wait for the police to arrive.

"The man grabbed the bus captain's (BC) neck and collar, holding on for more than a minute. He refused to let go even when our BC pleaded with him to do so," said SBS Transit.

"Our BC could be seen cowering with his arms shielding his face as the man started punching him repeatedly on the head."

Three young men at the bus stop boarded the bus and tackled the man, dragging him out of the vehicle.

SBS Transit said they pinned him down until the police arrived.

In a statement, police said they arrested the man for voluntarily causing hurt as well as for possession of an offensive weapon. Investigations are ongoing.

SBS Transit noted that several of its drivers have been attacked for enforcing the requirement to wear a mask. Denouncing the assaults, the transport operator said: "This is repugnant. And this must stop."

It said it has close to 40 cases of public bus staff being assaulted this year, about half of which were mask-related. This was up from 33 cases in the whole of last year.

Service and transport staff have come under increased pressure during the Covid-19 pandemic, with some patrons or commuters unhappy when told to follow the rules. 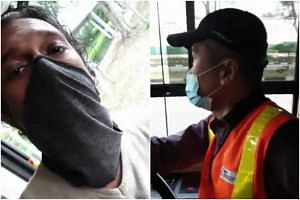 All bus drivers among 11,000 transport staff to be tested for Covid-19

The bus driver was taken conscious to Changi General Hospital after the assault and given three days of medical leave.

Attaching a photo of the battered driver, SBS Transit said: "We are thankful that he did not sustain any serious injuries. He is shaken but remains in good spirits."

In the incident that prompted his post, a man was seen in a 15-minute-long video shouting at a bus driver who would not let him board the bus as he was wearing a neck gaiter instead of a face mask.