SINGAPORE - The two victims in the alleged bullying case at Shuqun Secondary School had been picked on by the same student over a period of time, according to an aunt of one of the bullied boys.

And, the bullying would have gone unnoticed had it not been for the video, she added.

The aunt, who declined to be named, told The Straits Times that the recent incident is not the first time the student has picked on her nephew.

She had accompanied the mother of the boy to meet the school's principal, Mr Chia Hai Siang, on Wednesday (Sept 23) afternoon. Her 15-year-old nephew, however, did not attend the meeting.

"My nephew is scared enough not to go back to school in the last few days. He does not feel that it is safe enough," said the 38-year-old.

She added that the principal had suggested transferring the bully, who is in the same Secondary 3 class as the two victims, to another class.

She noted that her nephew, who had a few years of martial arts training, had chosen not to retaliate despite the bullying.

"I am amazed by his self-restraint. Not retaliating does not mean he is weak," she said.

The mother of the boy has since lodged a report with the police.

A 52-second video clip released on Monday (Sept 21) showed her nephew and another boy being hit on the heads repeatedly by their classmate. 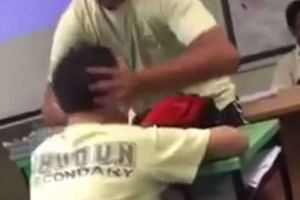 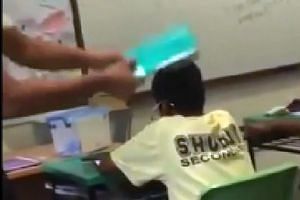 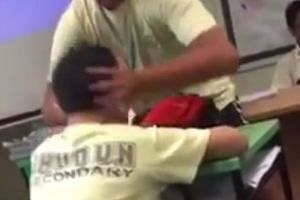 Both victims kept their heads bowed and did not retaliate. Another boy was seen dancing on the teacher's table in the background while the bullying went on.

The video, which appears to have been filmed by another student, was first posted on the Facebook page of citizen news site All Singapore Stuff.

The school in Jurong East confirmed in a statement on Monday that an adjunct teacher was present when the incident happened.

It added that the student "deeply regrets his actions".

"What might first begin as playfulness could potentially end up hurting others," a spokesman had said. "The school will continue to work with the students involved on observing appropriate boundaries and behaviour in the future."

A Secondary 4 student, who would not give his name, said the school's principal spoke to the students about the bullying incident on Tuesday and reminded them that it takes years to build up the reputation of a school but seconds to bring it down.