SINGAPORE - Singapore needs to make bold and decisive moves in infrastructure if it wants to stay ahead of the global competition - instead of just being content with incremental changes.

This was the message that National Development Minister Lawrence Wong and Urban Redevelopment Authority Chief Planner Hwang Yu-Ning had when they spoke to Insight on upcoming infrastructure plans that will take Singapore into the next phase of its urban development.

Speaking ahead of this year's Budget, Mr Wong referred to expensive mega projects that are likely to mean increased infrastructure spending over the next few decades. These include: the High-Speed Rail between Singapore and Kuala Lumpur, the Tuas megaport, and Changi Airport Terminal 5.

These projects are important because they will ensure Singapore remains "a competitive, attractive regional centre", giving Singapore "the best chance of success in an uncertain world".

This week's Insight looks at the big moves ahead in Singapore's urban planning, including five things you may not know about infrastructure planning here.

1. Land reclamation - empoldering to save 40 per cent in sand and construction

Land reclamation will continue to be an important way for Singapore to overcome its land constraints.

In recent years, the Republic has turned to a Dutch reclamation method called empoldering, that can save 40 per cent in sand volume and construction costs, said Mr Wong.

The method is being used in Pulau Tekong, which is set to grow by 810 ha, or the size or Toa Payoh, by 2022. The added land will be used for military training, freeing up space on the mainland - in Tengah - for housing.

Asked about complaints in Cambodia by local environmental groups that alleged sand had been illegally exported to Singapore, Mr Wong said: "The key thing is that all procurement agencies that procure sand from commercial providers will require requisite permits from the source countries - that is the ultimate check."

"We will not allow for any commercial provider of sand to come in without a valid export permit."

Not all areas identified to be of reclamation potential have seen reclamation works yet. Works only begin when there is a developmental need.

2. Cities that float on the sea?

Another idea to overcome space constraints here is building on sea - or using large "floating vessels" that can support big structures, including buildings.

Ms Hwang said the Government is studying this idea, but one key obstacle is that maritime space is already very crowded.

One solution currently being examined is whether ships can be parked using four-point anchors, which will reduce the space they need, as the current one-point anchor causes ships to drift in a circle.

"With proper anchoring, we can make our sea space more efficient and potentially make ideas like floating vessels (that one can build structures on) be more practical to implement," she said.

As infrastructure spending goes up, one area of concern is whether there are sufficient checks, so that money is spent prudently.

Mr Wong said all projects have to undergo at least two sets of checks: one at the ministry overseeing the project - to see if the benefits justify the costs, and another at the Finance Ministry, which scrutinises the project again and works out financing.

Big projects worth more than $500 million go through a more stringent process, with expert panels that review different aspects of the project: design, scope of works and cost effectiveness, among others.

"Those are processes we have put in place to make sure that every project is done in a way that achieves value for money," Mr Wong said.

4. Not all plans are implemented

While urban planners are eager to examine new and imaginative possibilities, not all their ideas come to fruition. Some plans are shelved for the time being - or even for good. 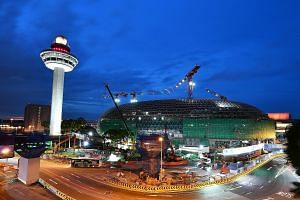 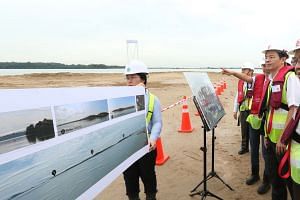 Last year, a plan to build an underground ring road in the central part of the island was set aside.

It was a plan that was 20 years in the making, and subterranean space at 295 properties had been previously safeguarded for the plan.

The road was not built because it was no longer needed, due to improvements to public transport and new land use policies.

Another plan that has not yet been implemented is the Long Island Project.

Under this plan, an island would be reclaimed off East Coast Park for recreation and premium waterfront housing.

This plan was set aside because of a lack of demand for it, said Ms Hwang.

"People love East Coast Park, so do we really want to commit to the plan if we don't need it? Some of these options can be safeguarded for future use," she said.

"If we need to dust off these plans later on, we would have already studied the idea."

Mr Wong said: "We have to do our due diligence; we have to study all options. We have to consider all possibilities as we go about planning for the future."

"When we do that, you may not want to embark on everything."

5. Challenges to urban planning in other countries that Singapore wants to avoid

During the interview, Mr Wong cited three major challenges to urban and infrastructure planning that other countries have seen. Singapore needs to overcome these challenges, if it is to stay ahead of the competition.

The first is fiscal constraints. The second is political gridlock. The third is the 'not-in-my-backyard' syndrome, also known as "Nimby".

Because of these three factors, infrastructure sometimes does not get renewed in other countries, as governments choose to kick the can down the road.

"New infrastructure doesn't come in and as a result, it does have a significant drag on productivity, on competitiveness and it ultimately impacts liveability," Mr Wong said.

"We must never allow that to happen in Singapore."