SINGAPORE - Budget airline Scoot is now flying to the German city of Berlin four times a week - its third long-haul destination after Athens and Honolulu.

The airline launched its first flight to Berlin on Wednesday (June 20) at Changi Airport, said Scoot in a statement.

Flight TR734 departed Singapore at about 12.25am, and was welcomed with a traditional water cannon salute upon arrival at Berlin Tegel Airport at around 7.20am local time (1.20pm Singapore time).

The route to Berlin from Singapore takes about 13 hours, while the return will take 12 hours and 30 mins.

The Boeing 787 Dreamliner carried 311 customers from countries, including Singapore, Indonesia and Australia, with half of them aged between 18 and 35, said Scoot.

Last year, Scoot introduced long-haul flights to the Greek capital and the Hawaiian city of Honolulu. 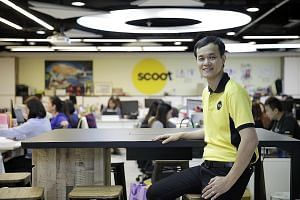 Scoot expanding to make up for lost time, to grow fleet to 70 planes by 2022

In celebration of the launch, Scoot is offering promotional fares from Singapore to Berlin from $239, for travel from Sept 10 this year to March 15 next year. The promotion ends on June 30.

Scoot currently flies to 65 destinations across 18 countries with its fleet of 17 787 Dreamliners and 24 Airbus A320 family aircraft.

Three more Boeing 787 Dreamliners and 39 Airbus A320neo aircraft have been ordered, with Scoot's fleet slated to increase to about 70 aircraft by 2022.

The budget carrier is the low-cost arm of the Singapore Airlines Group, which already flies to three destinations in Germany - Dusseldorf, Frankfurt and Munich.