As more than 1,000 Muslims gathered at the Abdul Razak Mosque in Eunos for prayer yesterday morning, volunteers from nearby Buddhist organisation Shinnyo-en Singapore helped to organise a partial road closure to give them more space to pray.

It was the first time that Shinnyo-en volunteers have served as road marshals during congregational prayers on Hari Raya Haji, which is also known as Eid al-Adha, or the festival of sacrifice that marks the end of the haj pilgrimage to Mecca.

"There have been more congregants coming to the Abdul Razak Mosque year after year, and some of them cannot enter the mosque," said the mosque's secretary, Mr Syed Salleh.

He noted that congregants would often end up praying on the pavement or road outside its premises, but this could be unsafe. "We decided to apply for permission for a partial road closure this year."

When the idea was mooted at a meeting of the Kembangan-Chai Chee Inter-Racial and Religious Confidence Circle (IRCC), Shinnyo-en offered to have its volunteers man the roadblock during the morning prayer on Hari Raya Haji, he said.

Mosque volunteers handled a similar roadblock during Hari Raya Aidilfitri earlier this year, but that meant they could not join the other congregants.

But they did so yesterday, when six Shinnyo-en volunteers stepped in to divert traffic from Jalan Ismail, in the private estate where the mosque is.

"We were so happy about that. It didn't occur to us that people from other races would be willing to help," said Mr Syed. "It gives our volunteers the peace of mind to say their prayers as well."

Ms Tan Pia Tiang, manager of Shinnyo-en, said: "Singapore is a religiously diverse country but there are many commonalities and one of them is prayer. We understand how this is important to our Muslim friends and wanted to volunteer so they do not have to forgo it."

She added that Shinnyo-en is happy to continue helping out in future Hari Raya celebrations. 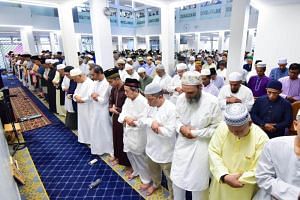 Think, reflect and be critical, Mufti urges Muslims in Singapore

3,700 sheep arrive in Singapore for annual korban ritual across 26 mosques

Kembangan-Chai Chee IRCC chairman Fazlur Rahman said it is not the first time Shinnyo-en has worked with a mosque in the constituency. Last Ramadan, its youth volunteers distributed vegetarian porridge at the Eunos MRT station and bus interchange with young people from the Darul Aman Mosque.

"Religious leaders already have platforms to communicate with one another. But what we need now are more ground-up initiatives where members of the community from various religious groups, especially the youth, come forward," he said.

"Beyond just tolerance or appreciation, we want them to feel comfortable doing activities together."

Kembangan-Chai Chee IRCC, which comprises representatives from religious and community organisations in the neighbourhood, was set up in 2011. It meets regularly to develop joint programmes for the community.