Fast food chain KFC responded cheekily to a chicken shortage in hundreds of stores in Britain by putting out a full-page newspaper advertisement that rearranged the letters of its name to "FCK", much to the mirth of its customers who may have forgiven the ubiquitous fried chicken brand for its lack of fowl.

KFC had closed half of its 900 stores in Britain earlier this week after operational issues with its new delivery firm DHL, the BBC reported on Wednesday (Feb 21).

DHL said it regretted the interruption of supply and was working to rectify the situation as soon as possible, CNBC reported.

"Whilst we are not the only party responsible for the supply chain to KFC, we do apologise for the inconvenience and disappointment caused to KFC and their customers by this incident," a DHL spokesman said.

The shortage, dubbed a "chicken crisis" by local media, prompted police in Manchester and London to implore the public to stop calling the police over KFC outlets being out of chicken.

According to KFC, more than half of its restaurants reopened on Tuesday afternoon, however hundreds of outlets remained closed while others had their menus and opening hours reduced.

KFC took the crisis in its stride, setting up a website called https://www.kfc.co.uk/crossed-the-road to inform customers on which stores were open. 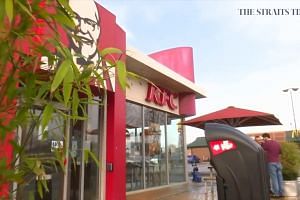 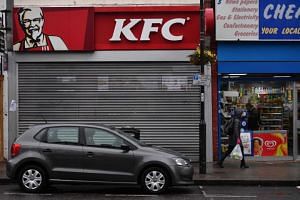 On Friday, it ran a full-page advertisement in newspapers, including tabloids The Sun and Metro, apologising for the shortage.

The colour advertisement, which depicted an empty chicken bucket with the letters of its name rearranged to read "FCK", read: "A chicken restaurant without any chicken. It's not deal. Huge apologies to our customers, especially those who travelled out of their way to find we were closed. And endless thanks to our KFC team members and our franchise partners for working tirelessly to improve the situation. It's been a hell of a week, but we're making progress, and every day more and more fresh chicken is being delivered to our resturants. Thank you for bearing with us."

The advertisement was crafted by Mother London, which touts itself as Britain's largest independent advertising agency, and may well have done its part to soothe ruffled feathers, judging from the thumbs up many netizens gave it online.