Babies who are breastfed are slightly more intelligent than those fed on formula. As babies, they are also less likely to get infections and, later in life, will have lower risk of obesity and diabetes.

So say two obstetricians from Singapore General Hospital (SGH) who want to debunk the "widespread perception by physicians and the public alike that infant formula is the preferred choice in infant feeding".

In a letter in the Annals, a journal of the Academy of Medicine whose members are largely specialists, Associate Professor Yong Tze Tein, who heads obstetrics and gynaecology at SGH, and Dr Yang Liying said doctors have "an ethical obligation" to know the facts and help mothers make the right choices.

The choice must always belong to the woman, they said. But doctors should not be an "unwitting impediment" to breastfeeding because they do not know enough on the subject.

They said many women wean their babies off breastfeeding prematurely because these women think they do not have enough milk. This is especially when the baby loses weight in the first few days.

It is normal for women to produce a low volume of milk in the first few days, and for an infant to lose 5 per cent to 7 per cent of his weight in the first three to four days.

The doctors said: "When inappropriate advice is given to supplement the perceived low supply of breast milk with infant formula, it becomes a self-fulfilling prophecy since it reduces the frequency of breast emptying and, consequently, milk production."

Mothers need to know "there are significant health risks associated with not breastfeeding".

Breast milk has a wide range of immunologically active substances - that formula lacks - and provides the infant with significantly greater protection against infections of the lung, gut and ears. 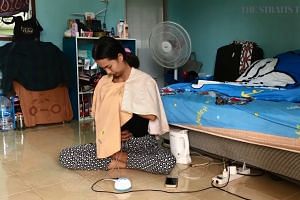 Express delivery: Kids get breast milk even when mum's miles away

War on diabetes: New moves in the right direction, but faster implementation needed

More breastfeeding could save the world $1.36 billion every day

Longer-term health risks for formula-fed infants include a higher risk of getting diabetes and cancer of the blood and bone marrow, the doctors said.

A study published in British medical journal The Lancet, on 3,500 babies in Brazil, backs this.

Started in 1982, the study found that, 30 years later, those who had been breastfed for a year or more had IQs that were 3.76 points higher, more education and better-paying jobs than those who had a month or less of breastfeeding.

Mothers too benefit from breastfeeding, such as having less post-partum bleeding. And a woman who has breastfed for more than a year is a third less likely to get ovarian cancer compared with a woman who has never breastfed.

Associate Professor Mahesh Choolani from the National University Hospital agreed that mother's milk is the best. But he added that it might not be a good option for women who have had breast cancer or implants.

So how long should babies be breastfed?

The doctors said the "minimum ideal" is six months, though natural weaning usually occurs between the ages of two and four years.

A study in 2011 by the Health Promotion Board found that less than 1 per cent of mothers were exclusively breastfeeding their babies for at least six months. The global average is 38 per cent.

The SGH doctors also want society to support mothers who breastfeed and stop seeing "breasts as purely sexual, rather than nutritive organs".