After admitting soya bean milk is not its own, it reassures public bread items freshly made

Amid consumer backlash, bakery chain BreadTalk has come out to defend the freshness of its main products - bread, buns and cakes.

After news broke on Monday that the 46-outlet chain's "freshly prepared" soya milk drink was in fact repackaged from Yeo's brand soya bean milk, consumers slammed the firm online, with many questioning the freshness of its other products.

"We want customers to know that all our buns and breads are freshly baked at each outlet," said Ms Joyce Koh, BreadTalk Group's senior vice-president of brand development, yesterday.

"Cakes and larger loaves of bread are baked at our central kitchen daily and transported to outlets." 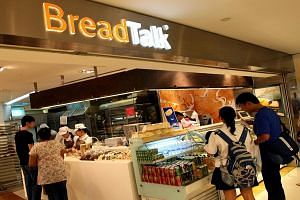 She added that buns and bread not sold at the end of the day are discounted to speed up sales. Leftover buns are distributed to staff.

"We don't sell them the next day," she said, adding that juices are freshly squeezed at either the outlets or at the firm's Upper Paya Lebar central kitchen.

BreadTalk pulled the bottled drink off its shelves the same day, and apologised to customers on Tuesday on its Facebook page "for any misaligned presentation or wrong impressions created".

Communications experts agree that admitting the mistake was a good move but say it will take some effort to regain consumers' trust.

Veteran PR practitioner Cho Pei Lin said: "Admitting that they did pour Yeo's soya milk into bottles is the best they can do. It is better than denying... or clamming up."

But, said the managing director of Asia PR Werkz, "what they did was so wrong that even being honest may not be enough of an apology to customers who faithfully bought their products thinking they were freshly prepared".

"Customers feel cheated and betrayed by a trusted brand."

Dr Seshan Ramaswami, an associate professor of marketing at Singapore Management University, agreed that apologising right away was a good move, but that the wording of the apology was important.

He said: "The words 'misaligned presentation' is public relations speak and a very awkward way of phrasing what people thought of as clear deception."

He suggested offering discounts for a week or two, and displaying the apology as a poster at the various outlets for a few days.

When asked what BreadTalk could do to regain trust, Dr Ang Swee Hoon, an associate professor of marketing at National University of Singapore's business school, suggested it put a time-stamp on bread items so customers can assess their degree of freshness.

"When you make a mistake, you want to compensate for it. But you should overcompensate first to show your sincerity," she said, adding that the incident is likely to affect sales at BreadTalk temporarily.

Student Rachel Jiang, 16, said she must have consumed at least 50 bottles of BreadTalk's soya bean drink over the past two years.

"Every time I passed by the MRT station I would buy one. I thought it was freshly prepared, and I was paying more for (that)," said the Secondary 4 student.

"I felt very cheated when I found out it was Yeo's. It is so dishonest. I wonder how long they would have continued this if they were not busted," she said, adding that she will no longer be a BreadTalk customer.

But Mr Marc Tan, a salesman, said he will continue to have his twice- monthly breakfast at BreadTalk's Ang Mo Kio branch.

The 53-year-old said: "What they did was not right, but I love their soft-boiled eggs and tea. And my son loves their pork floss bun.

"I don't drink their soya milk anyway, so we will still go back."