SINGAPORE - The nine-year-old boy who had a football kicked at his legs by Keith Tan Chee Siang has forgiven the stockbroker, his mother said.

He was upset because the boy had kicked the ball which accidentally hit Tan's young daughter, causing her to fall off her skate scooter.

Wanting to teach the boy a lesson, Tan told the boy to stand near a void deck wall and kicked the ball at his leg three times. The boy also suffered a nose bleed after the ball rebounded off the wall and hit his face. 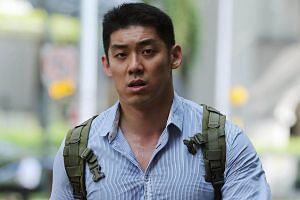 Madam Lu, an interior designer, said her son was a very obedient and sensible child, and had told his family to forgive Tan even though he was initially affected by the incident.

"Though there was a period of time when he did not dare to venture outside and go downstairs to play, he managed to overcome his fear," she added.

The boy had been playing football with a friend at a HDB void deck in Bukit Panjang when the incident took place.

"He also told me he had forgiven (Tan), and asked us not to pursue the matter as they were neighbours and should be on good terms," Madam Lu said.

In mitigation, Tan's lawyer had said his client's daughter suffered an abrasion after falling off her skate scooter.

He also said Tan was upset and genuinely remorseful for committing the offence on the spur of the moment, and that he should not have taken the matter into his own hands.