SINGAPORE - A six-year-old boy was injured after an electric scooter rider crashed into him near Punggol Park on Thursday evening (April 12).

The police said they were alerted to a case of negligent act causing hurt at Block 470A Upper Serangoon Crescent at about 7.15pm.

The Singapore Civil Defence Force said the boy was conscious when taken to KK Women's and Children's Hospital.

Chinese-language newspaper Shin Min Daily News reported on Friday that the boy was hit by the rider from the back.

The Straits Times understands that the e-scooter rider is a 40-year-old man.

The e-scooter's wheels and handlebars were crushed due to the impact of the collision, Shin Min said.

The man later apologised to the boy's family members.

No arrests have been made so far. Police investigations are ongoing.

This was the second e-scooter incident on Thursday evening. 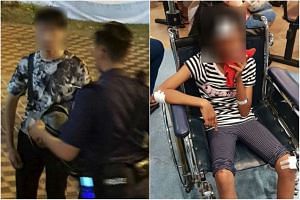 A 24-year-old man was arrested on Thursday after he allegedly knocked down an 11-year-old girl near Pasir Ris East Community Club.

The girl received several stitches to her gums, and had abrasions on her head, face, elbow and knees.

The man was arrested for committing a rash act causing hurt.