SINGAPORE - Firefighting is in his blood. In fact, one could say 76-year-old Yunnos Shariff was born into it.

He was born in 1943 in the former Geylang Fire Station in Paya Lebar Road, where his father was serving as a fireman.

Mr Yunnos himself later became a fireman, rising to be a Singapore Civil Defence Force (SCDF) Second Warrant Officer before retiring after 41 years of service.

For the past nine years, he has been a volunteer guide at the Civil Defence Heritage Gallery at the iconic Central Fire Station in Hill Street.

He was among 12 volunteers who received the inaugural Outstanding SCDF Volunteer Award from President Halimah Yacob on Friday (July 20) at the SCDF Volunteer Gala Nite 2019.

The gala, held at the Grand Copthorne Waterfront, commemorated 150 years of civil defence volunteerism in Singapore. Volunteers made up the first fire fighting unit on the island in 1869, and it later became the Singapore Fire Brigade in 1888. 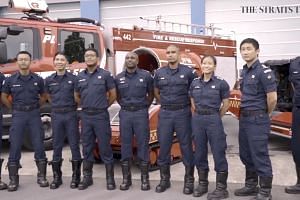 A trial by fire for SCDF at massive LPG facility blaze 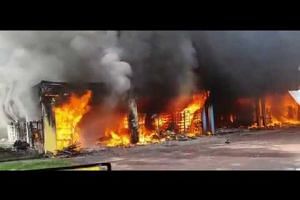 Madam Halimah on Friday announced that the SCDF would be providing personal accident insurance coverage for community first responders.

Law and Home Affairs Minister K. Shanmugam, who was also at the gala, cited the importance of first responders, using the victim of a heart seizure as an example.

Mr Yunnos currently holds the distinction of being the most senior volunteer in the SCDF, a point President Halimah noted.

She said: "Mr Yunnos holds the proud honour of being our most senior SCDF volunteer, and his passion and dedication to civil defence have clearly stood strong through the years."

Recalling his childhood at Geylang Fire Station, Mr Yunnos said his family lived at the quarters until 1950, when they moved to the Central Fire Station quarters.

At 19, he joined the Singapore Fire Brigade. Three of his brothers did so too.

One incident that remains etched in his memory was the MacDonald House bombing in 1965, in which three people died and at least 33 others were injured.

"When the bombing happened, I felt the vibration from the station. The police called and the public started calling us without stopping," said Mr Yunnos, who was based at the nearby Central Fire Station.

Another pioneer firefighter cited by Madam Halimah was Mr Yap Swee Kang, who began volunteering in 1955 with the Singapore Fire Brigade.

His wife, Madam Png Soi Moi, 86, said her husband continued to serve for about 10 years because he wanted to "serve the nation and help others". Mr Yap died in 1985.

Speaking in Teochew, Madam Png said firefighters would knock on the door to activate Mr Yap for duty. Other times, they would approach him at his market stall where he sold fish and chicken.

She also recalled that the neighbourhood in Upper Dickson Road where they lived had a strong community spirit.

"Whenever there was a fire, the children would be brought to safety while the men would come together with buckets of water to put out the fire," she said.