When Old Airport Road Food Centre was opened in 1973 to resettle street hawkers around Kallang Estate, I was a Primary 6 pupil studying at the now-defunct Mountbatten English Primary School.

The building, which had food stalls on the ground floor and shops on the upper levels, was considered the country's most modern hawker centre and boasted the latest architectural designs.

It reflected the style of food centres built in new towns in the 1960s and 1970s, such as those in Woodlands and Commonwealth Avenue.

My school was right opposite the food centre, where Broadrick Secondary now stands.

The area in which this new estate was constructed was actually the old Kallang Airport's premises.

Given that we lived within a stone's throw from Old Airport Road Food Centre, it became my family's favourite haunt.

My daily allowance then was 30 cents, and I remember skipping meals during recess at school to save up for a Bic ballpoint pen, which cost a dollar.

I bought it from Mr Ho Khek Yue, then in his early 20s, who runs Sze Lih stationery shop on the second floor.

I was happy, my mother was not, and I received a huge scolding from her. 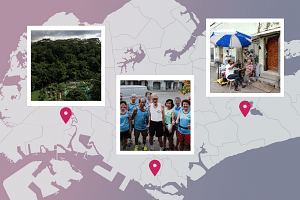 More than 40 years have passed.

I am now a 58-year-old photojournalist, while the affable Mr Ho is 70 and still opens his shop daily.

He even remembers my mother, who used to take my three younger sisters and me to buy our school and personal stationery supplies in bulk for a discount.

Times have changed and the small business owners on the second floor lament an era gone.

Their trade flourished in the 1970s and 1980s, with Malaysian tourists coming in by the busloads to buy towels and electrical goods.

Today, while some of the stores run by first-generation shopkeepers like Mr Ho remain open, Level 2 of Old Airport Road Food Centre is a pale shadow of its former self.

Said Madam Lim Kim Luan, 73, who owns five units selling shoes and electrical appliances at the centre: "I've dedicated more than half my life to my shops. I've thought about calling it a day, but I cannot bear to lose my life's work."

While I enjoy my carrot cake, char kway teow and seafood hor fun on the first floor like many customers in search of the best food in the Mountbatten area, I hope that, after filling our stomachs, we will take a stroll upstairs, where our presence will be more than welcome.