Healthcare charity Bone Marrow Donor Programme (BMDP) has obtained a one-year renewal of its Institutions of a Public Character (IPC) status, following a special audit in 2016 that uncovered governance and administrative lapses.

The charity, which runs Singapore's only register of volunteer bone marrow donors, made the announcement yesterday as it unveiled its new chief executive officer Charles Loh.

Mr Loh, a senior vice-president at Certis Cisco from 2006 to 2016, said he aims to grow the pool of local bone marrow donors. "We can do more to increase the number of local donors, strengthen collaboration with the global network of registries and enhance the public education of blood diseases.

"We are glad that our IPC status has been renewed for another year and we can now look forward to implementing our plans."

Earlier in January, BMDP's then CEO Jane Prior resigned after being at the helm for five years.

In 2016, BMDP underwent a special audit ordered by the Ministry of Health (MOH). It began in September 2016 and concluded last August, after which BMDP was ordered to rectify the governance and administrative lapses uncovered.

A draft audit earlier seen by The Straits Times last year flagged "critical and major" areas of concern after reviewing the charity's operations between 2013 and July 2016. Among the findings, the audit questioned the "excessive" use of donations on marketing and entertainment, and an "unclear policy" regarding the reimbursement practice for entertainment purposes. 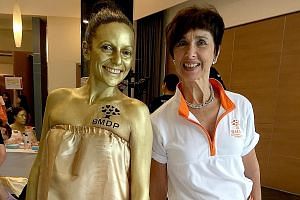 The findings of such audits can have an impact on the renewal of a charity's IPC status.

Following the investigation, MOH gave a five-month extension to BMDP's IPC status until the end of last year.

With the one-year renewal of its IPC status, the charity can continue to raise funds from donors who will enjoy a tax deduction.

In response to queries from ST, MOH said the BMDP board has provided regular updates to the ministry and that its IPC status has been renewed till June 30 next year.

"BMDP has been taking steps to improve its administration and governance. MOH continues to monitor their government and administration," said an MOH spokesman.

Yesterday, BMDP also announced the appointment of its board president, Dr Lim Zi Yi. Dr Lim was previously the vice-president of the charity board.

Mr Loh said BMDP has updated its policies and processes since coming under the audit.

He said: "We have taken the lessons learnt and turned them into a comprehensive plan.

"We will also instil a greater sense of compliance culture so that we can move forward to implement the policies that have been put in place."