SINGAPORE - Reverend Yap Kim Hao, the first Asian bishop of the Methodist Church in Singapore and Malaysia, and a vocal advocate of lesbian, gay, bisexual and transgender issues (LGBT), died of heart failure on Thursday (Nov 16) morning at the age of 88.

The Free Community Church, where Dr Yap was pastoral advisor, posted a tribute on its Facebook page .

"You have blazed a trail of justice, of compassion, of humility... reaching out to those on the margins..we will build upon your work, to be peacemakers, to be seekers of righteousness and justice," it said.

It also included a message from Dr Yap's daughter Susan Tang. "He fought every good fight he could with every fibre of his being. His work on earth is done and he's earned a well-deserved rest," said Mrs Tang, who is a founding member of Safe (Supporting, Affirming and Empowering our LGBT family and friends).

Entrepreneur and blogger Adrianna Tan wrote on Facebook: "No one has done more for LGBTQ and other oppressed minorities in Singapore than you have. Thank you for reaching out to me at a time when I needed your support."

LGBT rally group Pink Dot said it acknowledged with gratitude the support Dr Yap had publicly shown towards the LGBT community in Singapore, citing how he had backed a legal challenge that sought to have Section 377A of the Penal Code, which bans homosexual sex, declared unconstitutional. He had also participated in Pink Dot events, including appearing in its campaign videos.

Dr Yap was consecrated the first Asian bishop of the Methodist Church in Singapore and Malaysia in 1968. After his retirement from full-time Christian ministry at the age of 65, he continued to champion many causes.

He was the former Vice-President of the Inter-Religious Organisation (Singapore), the Convenor of Singapore Interfaith Network on Aids, and chairman of Chen Su Lan Trust, which has supported non-governmental organisations working with those on the margins, including migrant workers and sex workers.

He was presented with the Red Ribbon Award in 2012 by advocacy group Action for Aids for helping lead the fight against stigmatisation and discrimination of HIV sufferers, and promoting safe sex programmes.

But the pastor was best known for his work and views on LGBT issues.

Responding to a July 2003 letter in The Straits Times' Forum section urging the government to rethink the hiring of gay people, Dr Yap wrote: " I applaud the stance of the Prime Minister in announcing that the Government is more open to employing gays now.

"The lack of understanding of the condition of homosexuality and the harsh homophobic views expressed in the letter are regrettable. From my meetings with members of the gay and lesbian community, I have come to see them as normal human beings even though their sexual orientation is different from mine."

It is only right, he added, that Singapore not discriminate against anyone on account of race, religion or sexual orientation. 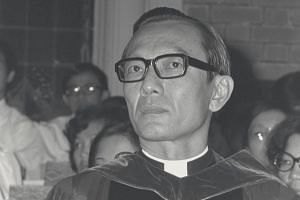 At a 2007 forum on Section 377A of the Penal Code, the late pastor had said: "Contrary to the majority of the Christian views... I personally would call for it to be repealed on the basis that this is God's purpose - the existence of the homosexual community."

Free Community Church Executive Pastor Miak Siew told The Straits Times: "He was the first religious leader to voice support for LGBT people. He discerned that in the time of his retirement, he was called to minister to the lost sheep of the LGBT community - to speak up for the voiceless and the marginalised."

Dr Yap is survived by his wife, four children, grandchildren and a greatgrandchild.

The three-day wake at Mount Vernon Sanctuary starts on Saturday.