A wide-ranging study will be under way in the coming months to find out how Singapore's workers can be matched to future jobs, as digitalisation and disruptive technology have changed the way businesses operate.

The data will help define how workers can be trained even as their workplaces undergo changes. It will pave the way for specific training programmes in various sectors.

Announcing the initiative, National Trades Union Congress (NTUC) secretary-general Ng Chee Meng said the findings are expected to be ready a year from now. Even as the way businesses operate changes, the profile of the Singaporean worker is also changing, Mr Ng said in an interview with The Straits Times on Monday, on his first 100 days as the labour chief.

Rank-and-file workers used to make up about 70 per cent of all workers, with PMETs (professionals, managers, executives and technicians) making up the rest. But the ratio is now about 50:50, and still evolving.

Mr Ng said apart from having unions and associations represent different groups, he hopes to chart a direction on how workers can develop as well. "How do we actually match the new Singaporean worker to Industry 4.0?" he asked, referring to the trend of automation and how it is changing various sectors.

For a start, one will need to explain to workers the new requirements, as technological disruptions come into play. These involve adaptive skills, or the ability to deal with change; technology skills, which refer to the breadth of digital knowledge that workers need to be exposed to; and technical skills, meaning job-specific knowledge, said Mr Ng, who is also Minister in the Prime Minister's Office. "We feel this is a good start, but we want to drill deeper into what are the archetypes. For example, nurse 4.0, healthcare worker 4.0, technician 4.0." 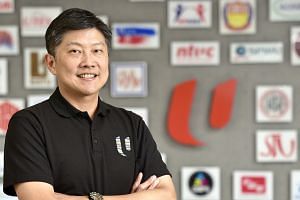 NTUC's challenge: Being relevant to and representative of workers

The next part is implementing these concepts through a training arm set up by NTUC. A training council Mr Ng chairs has been set up, with NTUC's Employment and Employability Institute as secretariat. It will work with partners, including union leaders, institutes of higher learning and government groups like Workforce Singapore, to develop the training programmes.

NTUC could partner a unionised company that is ahead of the curve to come up with details for the courses, said Mr Ng. He cited the Healthcare Academy that was set up recently by NTUC LearningHub and Healthcare Services Employees' Union as an example of how workers can be trained for new roles.

Labour economist Randolph Tan of the Singapore University of Social Sciences said the labour market will likely benefit from in-depth studies of impending job disruption and future skills needs. A major source of uncertainty, he said, arises from rank-and-file workers not knowing what skills are going to be in demand.

He believes NTUC is critical in helping to plug this gap for workers and ensuring they are prepared early.

National University of Singapore economics lecturer Kelvin Seah said the move could help cut workers' risks of unemployment. "Without this push, companies may lack the incentive to send their workers for retraining."

Nanyang Technological University economics professor Chew Soon Beng added: "People feel threatened by technology, but you have to give them hope as well... If employees are learning while they are working, that is the best."

A version of this article appeared in the print edition of The Straits Times on September 06, 2018, with the headline 'Big study to find out how workers can be matched to future jobs'. Subscribe
Topics:
More
Whatsapp Linkedin FB Messenger Telegram Reddit WeChat Pinterest Print Purchase Article Copy permalink