The number of teenage girls getting pregnant in the past decade has dropped massively, and it is not because fewer of them are having sex.

Instead, social workers say, it is because today's teens are more savvy about using contraceptives.

There were 359 babies born to girls aged 19 and under last year. This is the lowest in 25 years, going by checks of the Report on Registration of Births and Deaths published annually by the Immigration and Checkpoints Authority. 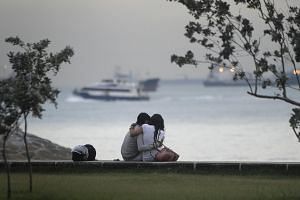 Teenagers starting to have sex at a younger age, say social workers

Separately, Health Ministry figures show that the number of girls under 20 who terminated their pregnancies has also plummeted. In fact, births and abortions by teenagers have fallen year on year in the past five years.

Teens are not emotionally or mentally ready to be parents. So one baby born a day to a teen mum is still one too many.

Teen pregnancy was in the spotlight recently when an 18-year-old father placed his newborn son in an SG50 bag outside his parents' flat, passing him off as an abandoned baby. His girlfriend is only 14 years old and the couple did not know what to do with the baby.

Some girls even share birth control pills with their friends, knowing their boyfriends may not want to wear a condom, said Ms Lena Teo, assistant director of counselling at the Children-at-Risk Empowerment Association (Care Singapore).

"Anecdotally, I think more teens are having sex and they are also more open about sharing with us about sexuality matters. They just got smarter about preventing pregnancy," she added.

While the emphasis is still on abstinence and how to say no to having premarital sex, topics such as sexually transmitted diseases and condoms are also discussed.

While fewer teens are becoming pregnant, those in that condition still need support.

Social workers said such girls are afraid to tell their parents, are unsure what to do, and have no means of bringing up their children by themselves even if they wanted to.

Their boyfriends may have left them after learning about the pregnancy, or may be just as helpless as the girls.

Said Mrs Christina Vejan, executive director of Babes Pregnancy Crisis Support, which specialises in helping teens: "Teenage pregnancy is still a taboo and teens have to deal with the shame of it."

Social workers say many of the pregnant teens they see give birth as they find out too late in their pregnancy to abort.

In Singapore, abortion is allowed only for pregnancies of up to 24 weeks. Parental consent is also not needed before a teenager is allowed to have an abortion.

Some teens may not know they are pregnant, even after their baby bulge starts to show.

Those who choose to give birth often do so because they cannot bear to abort due to religious or personal beliefs, and have support from their families or boyfriends to raise the baby, said Ms Jennifer Heng, director of Dayspring New Life Centre.

The 359 babies born to teens last year amount to almost a baby a day. Though the figure has dropped, some social workers feel that it is still too high.

Dr Carol Balhetchet, senior director for youth services at the Singapore Children's Society, said: "Teens are not emotionally or mentally ready to be parents. So one baby born a day to a teen mum is still one too many."