Once a hill reserved for royalty and avoided by locals, Fort Canning Park is now the site of the centrepiece of Singapore's bicentennial experience. Yesterday, President Halimah Yacob launched the showcase - From Singapore to Singaporean: The Bicentennial Experience.

It comprises an hour-long indoor cinematic journey called Time Traveller, which begins with the story of the country's evolution in the 500 years before the arrival of the British in 1819, and an outdoor exploratory trail called Pathfinder, which features eight interactive pavilions and installations.

In her speech, Madam Halimah noted that the multimedia showcase has been two years in the making. "An enormous amount of work has been put into it. The organisers ploughed through mountains of books, papers and maps, so that their retelling of the Singapore story could be as accurate as possible," she said.

Some 300,000 visitors are expected to make their way up the hill during the show's run from tomorrow to Sept 15. To make it more accessible, the National Parks Board installed covered escalators connecting Fort Canning and Bras Basah MRT stations to the park.

The showcase has been previewed by more than 10,000 visitors over the past two weeks. Organisers said their response has been "extremely encouraging" and 90 per cent of 1,500 people surveyed indicated an increase in their knowledge of Singapore's history. Yesterday's launch was attended by historians and community representatives.

Madam Halimah also launched the updated version of the book Seven Hundred Years: A History Of Singapore, co-written by historians Tan Tai Yong, Kwa Chong Guan, Derek Heng and Peter Borschberg. It represents 30 to 40 years of their collective research and will be on sale at all major bookstores and Fort Canning Centre.

The book, said Mr Kwa, emphasises the Malay perspective, including the contributions of the orang laut (sea nomads), as well as the role of Bugis traders. 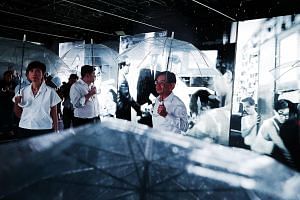 Madam Halimah said: "This new book debunks the myth that Singapore was a sleepy, insignificant fishing village - little more than the 'occasional resort of pirates', as some derisively put it - before Raffles landed here."

She also announced the launch of interactive website 700years.sg, which will supplement history curriculum in secondary schools. It showcases multiple perspectives of Singapore's history through imagined social media feeds of historical characters from various epochs over the past 700 years.

The website will be rolled out in phases, starting with characters from the pre-colonial period, including Sang Nila Utama, a Palembang prince from Srivijaya, and the last king of Singapore Parameswara .

Madam Halimah urged Singaporeans to take a pause in the bicentennial year "and stand on the shoulders of our history, as we reflect on what it means to be Singaporean, the common values and beliefs that bind us".

She said 1819 must be remembered as an important inflexion point as it planted the seeds of Singapore's post-independence history, set the stage for the development of modern Singapore, and gave Singapore different values and world views from its neighbours, despite the close ties.

She said: "I hope The Bicentennial Experience, the book and the interactive website will enable Singaporeans to have a better appreciation of our shared journey. Our forebears have faced several ups and downs. But they always pulled through because they were determined to make something of themselves.

"We will continue to be confronted with uncertainty and challenges in the years, decades and centuries to come. But whatever happens, one thing for sure is that we must hold on to our Singaporean DNA - openness, multiculturalism, and self-determination."