But the website’s administrator told The Straits Times that the campaigns were intended as design mock-ups that were accidentally published online, and no monies were collected from the public.

The NVPC said in a statement that the website Giving Nepal (http://www.givingnepal.org) duplicated campaigns that were originally posted on national giving portal Giving.sg.

The centre, which manages Giving.sg and is a non-profit organisation, added that it has lodged a police report and the relevant authorities are investigating the matter.

The Commissioner of Charities, fundraisers and affected charities have also been informed of the issue.

Giving.sg matches donors and volunteers to over 470 charities, and givers can contribute in various ways such as volunteering for activities or making a financial donation.

Six campaigns by organisations in Singapore were duplicated on the Giving Nepal site, without the consent of the original fundraisers.

NVPC said these organisations do not receive any monies donated through the Giving Nepal website. 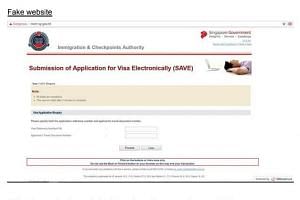 Among campaigns duplicated include those for the President's Challenge and Girl Guides Singapore.

A check by ST on the Giving Nepal site on Thursday evening found that the six campaigns had asked for donations totalling 373,057 Nepalese rupees (S$4,385). The campaigns’ webpages indicated that they had garnered 17,290 Nepalese rupees in donations.

However, these webpages were taken down by 9.35pm.

NVPC added that Giving.sg is still a safe and secured online platform that has not been affected by any security breach. It also said that none of its donors' information has been leaked.

Members of the public who have donated to the unauthorised campaigns on Giving Nepal are advised to contact Giving.sg at hello@giving.sg. They can also contact the Commissioner of Charities or the relevant charities directly.

NVPC said some precautions the public can take before making a donation online include checking if a website is legitimate and visiting the Commissioner of Charities website to find out if a beneficiary is registered as a charity.

An administrator of Giving Nepal told ST that the Giving.sg campaigns appeared on the site because of a mistake by its developers. The campaigns were duplicated on Giving Nepal as mock-ups for how fundraisers could appear on the site but they were mistakenly published online, he said.

The administrator also apologised for the mistake, and said Giving Nepal was a legitimate fundraising page for causes in Nepal and it was still in development.

No donations for the duplicated Giving.sg campaigns on Giving Nepal could have been made nor processed as those features had not been enabled yet, he added.