Blog cites 'dearth of information available', says 'inaccuracies not the same as falsehoods'

A day after Home Affairs and Law Minister K. Shanmugam charged that it had engaged in a "planned, orchestrated campaign using falsehoods" to blemish the police, The Online Citizen (TOC) denied that it had deliberately misled the public.

"Given the dearth of information available to us, it is natural that some of our reports were not fully accurate," the socio-political blog wrote on its website, arguing that "inaccuracies are not the same as falsehoods".

TOC had published 25 related articles after 14-year-old Benjamin Lim was found dead on Jan 26 at the foot of the Housing Board block in Yishun where he lived. Earlier that day, he had been questioned by police for the alleged molestation of an 11-year-old girl.

Asked about TOC's editorial yesterday defending itself, the Home Affairs Ministry said the police had already said on Feb 1 that there would be a coroner's inquiry (CI) into Benjamin's death. "(The minister) has given a full response in Parliament on the falsehoods put out in this matter, and has also explained why questions addressed to the ministry or the police cannot be answered, prior to the CI. There are proper processes in place to establish the facts," a spokesman said.

In Parliament on Tuesday, Mr Shanmugam addressed the issue to set out the facts and maintain public confidence in the police. Describing Benjamin's death as tragic, he hit out at "deliberate falsehoods" that have been spread in the case to tar the police. He took particular aim at TOC, saying its articles "practically (led) people to conclude that Benjamin committed suicide as a result" of how the police handled the case.

But TOC said only four of its articles were written in-house. The rest were letters and opinion pieces contributed by members of the public. "Their reactions were spontaneous", and this was "hardly an orchestrated campaign", it said.

NO RULES IN COURT OF PUBLIC OPINION

The problem with the court of public opinion is, there are no rules. Sometimes, the one who shouts the loudest gets the furthest... There is no scope for a forensic examination of the facts.

VETERAN LAWYER AMOLAT SINGH, on how a coroner's inquiry is the proper forum to lay out the facts of what happened 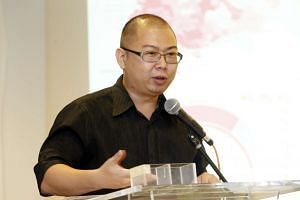 A "falsehood" highlighted by Mr Shanmugam was contained in a Feb 5 article, which quoted a woman who claimed that officers went to Benjamin's school wearing attire with police markings. The minister made it clear that all the officers were in plain clothes. Investigations showed that TOC received its information from a Facebook post by a woman, who admitted to getting her dates mixed up. She later took down her post.

TOC said yesterday that it had contacted her on social media to verify her claims. It also said it reached out to the police and other officials before publishing the article, but did not receive any replies.

Mr Shanmugam pointed out TOC's "tactics" in posing questions to the authorities, then implying a cover-up when no response was forthcoming. The minister explained that the authorities had chosen not to comment in detail on this case out of respect for the family and as there was a CI.

In a Feb 23 article, TOC detailed the questions it had sent to the authorities, and titled the piece "Questions about Benjamin Lim's case, Home Affairs Minister and SPF cannot answer". TOC insisted yesterday that it believes "in giving all sides a chance to speak. Soliciting answers to pressing questions isn't a 'tactic'. It is merely journalism".

After Mr Shanmugam's ministerial statement on Tuesday, social activist Ravi Philemon, 47, wrote on Facebook that "the minister was right" for thinking that TOC put up a "planned, orchestrated campaign". When contacted by The Straits Times, the former editor of TOC clarified that while the articles may have tried "to get justice for the student", they "inadvertently also implied that the school and the police were less forthcoming".

And while not all the articles were written by TOC, he added, this "does not absolve the editors" of responsibility as they decide which pieces are put up.

Mr Shanmugam also highlighted that making claims about Benjamin's case could have infringed rules of sub judice, since an inquiry was pending. The rules of sub judice, which is Latin for "under judgment", regulates the publication of matters that are under consideration by a legal proceeding.

Veteran lawyer Amolat Singh said a person may be held in contempt of court for violating these rules, and agreed that a CI was the right forum to lay out the facts of what happened.

"The problem with the court of public opinion is, there are no rules. Sometimes, the one who shouts the loudest gets the furthest," he said. "There is no scope for a forensic examination of the facts."