After more than 2,700 hours of rehearsals over six months to perfect their snazzy routines, about 8,000 performers and parade participants, from children as young as six to pioneers in their 80s, will finally put it all together at this evening's National Day Parade. Lim Yi Han and Melissa Lin go behind the scenes to talk to those behind the Golden Jubilee Show

When Captain Phuah Wei Wen steps out of the car after the Prime Minister's motorcade pulls into the Padang, he is often greeted with light laughter.

But the 26-year-old brushes it off, and never breaks character as Prime Minister Lee Hsien Loong, whom he stands in for during National Day Parade (NDP) rehearsals.

"I have to portray PM Lee as best as I can. My role is important because the pace at which I make my movements will(affect) the next cue," said the regular from the Republic of Singapore Air Force.

Capt Phuah, who put his name up for the job, was picked for his height - at 1.83m, he is as tall as PM Lee - and his confident bearing. But Capt Phuah also does his part by observing PM Lee's movements in videos of previous NDPs on YouTube. 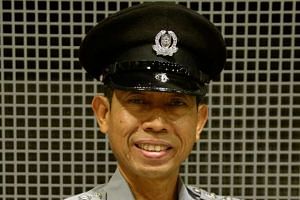 At rehearsals, he also takes the chance to learn from reviewing officers, including Defence Minister Ng Eng Hen and Speaker of Parliament Halimah Yacob. "I would observe how they come out of the vehicle and their movements," he said.

One thing that struck him was how grand the parade looks. "When I was standing on the saluting dais, and the whole contingent did a salute, it looked so grand and impressive."

Today, Capt Phuah will be coordinating the entrance of the VIPs, giving him the chance to have one wish come true. "I've not met PM before," he said, "so hopefully I get to meet him in person."

A version of this article appeared in the print edition of The Sunday Times on August 09, 2015, with the headline 'BEHIND THE STAGE LIGHTS Getting into character to portray PM Lee'. Subscribe
Topics:
More
Whatsapp Linkedin FB Messenger Telegram Reddit WeChat Pinterest Print Purchase Article Copy permalink