SINGAPORE - A swarm of beetles, carrying tiny computers as backpacks, could one day be crawling through cracks and crevices in search of survivors during rescue missions.

Researchers from Nanyang Technological University (NTU) have developed what they say is the world's smallest cyborg insect, which they can move right and left, backward and forward, with the click of a button.

Using a species of darkling beetles that measures just 2cm to 2.5cm long and weighs only 0.5g, the team attached a tiny computer of the same weight on the back of each beetle using beewax.

Using a remote control, they can send electrical pulses to the insect's antennae through implanted silver wire electrodes.

The electric pulses mimic those that the insect would feel when its antennae touch an object, which causes the insect to turn on its escape mechanism.

Sending an electric pulse to its right antenna makes it turn left, and vice-versa.

At present, two 1.55-V coin cell batteries can operate the tiny computer continuously for up to eight hours. The team hopes to extend this to three days through ways such as using a biofuel cell, which can generate power using glucose in the insect.

A paper on the work was published in scientific journal Soft Robotics recently.

The team is currently developing sensors to detect things like carbon dioxide, temperature and the vibration of heartbeats, which they will integrate into the beetle's backpack to aid in its detection of human life.

"In the aftermath of a disaster, many survivors remain buried and the rescue teams are often not clear which sites they should comb. We need tools that can get through small spaces to help them find missing people," said Assistant Professor Hirotaka Sato from NTU's School of Mechanical and Aerospace Engineering, who led the research.

The paper's first author, NTU research fellow Vo Doan Tat Thang, noted that as the beetles are commonly found in the environment, they are unlikely to affect the balance of the ecosystem even if they get lost. 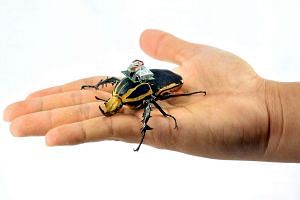 Two years ago, the same team created a cyborg giant flower beetle, which could take flight and change directions using radio signals. It was also developed for search-and-rescue missions. However it is bigger at 6cm in length, making it less efficient in getting into cracks and crevices.

It is, however, still early days before these cyborg insects are deployed for their first real life missions. Dr Sato said it might take another five to 10 years before this happens.

Critics have slammed such research, with some calling it "animal torture" and others asking why robots cannot be used instead.

Dr Sato said miniature robots need large amount of energy to operate, hence requiring them to be wired. Complex algorithms are also needed to help them walk and avoid obstructions.

"You also need to assemble very tiny parts which take weeks. For search-and-rescue missions, we need hundreds of robots, and creating that many quickly is not realistic," he added.

Singapore's ethics for animal experimentation, as laid out in the National Advisory Committee for Laboratory Animal Research (NACLAR) Guidelines, also does not apply to invertebrates such as beetles.

The research team said it conducted the study with "utmost care" for the beetles to ensure that they were not harmed.

"The beetles also continued to eat, move and behave normally after the experiment," said Dr Sato.