Firms are working on culturing stem cells from chickens, cows and fish to make meat

It is clean, has a low carbon footprint and does not involve any killing. Lab-grown meat is a key protein alternative of the future and could be making its way to dinner plates here, as Singapore ramps up production of home-grown food.

The effort is getting a boost from the Government's Research, Innovation and Enterprise 2020 plan, under which $144 million is going into food-related research, including sustainable urban food production, future foods and food safety science and innovation.

Leveraging its existing technology in bioproduction and stem cell bioengineering, A*Star's (the Agency for Science, Technology and Research) Bioprocessing Technology Institute (BTI) has started trials on culturing meat, which will be grown on a large scale in bioreactors. Eventually, the cells will comprise at most half of the meat, with the rest made up of bulking agents such as starch and other ingredients to improve taste and texture.

But its nutritional value will be similar to that of traditional meat, said Dr Kelvin Ng, head of strategic innovation at BTI.

At the end of the year, he hopes to start making chicken meat in a lab by reaching out to local farms to extract cells from live chickens.

Other biotech firms here are also culturing cells for food. Local start-up Shiok Meats, for instance, is working on growing seafood in labs. To reduce its reliance on imports and cushion itself against overseas supply disruptions, Singapore has the ambitious target of producing 30 per cent of the food needed here by 2030. By that time, Dr Ng predicts, lab-grown mince could already be on the market.

"Cultured meat products like minced meat or meat fillings are also easier to develop than a slice of beef steak or chicken fillet, which would require additional technology to create the texture, mouth-feel and taste that consumers are looking for," he said. 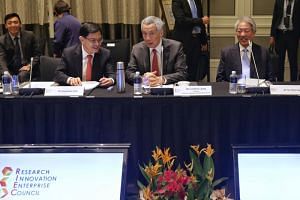 One of BTI's key goals is to make alternative meats affordable. Cultured meat is expensive now because the culture media used to feed the cells are costly.

"One approach is to develop food-grade equivalents of culture media, which would reduce costs substantially," he said.

"Another approach is to explore alternative raw materials, such as plant and microbial extracts, or adopt more efficient manufacturing approaches like continuous bioprocessing or recycling culture media."

A*Star also employs other ways to create alternative proteins in the lab.

Its Biotransformation Innovation Platform (BioTrans) feeds microorganisms such as yeast into large-scale bioreactors to convert the sugar into proteins that can be formulated into various food products, such as milk and egg whites.

The proteins can also be used as speciality feed for fish and livestock.

Biotrans also used microbes to produce more than 20 natural-based flavours, fragrances and ingredients such as lavender, citrus and peach.

Lab-grown meat: from cell to steak

A version of this article appeared in the print edition of The Straits Times on March 28, 2019, with the headline 'Beefing up efforts to grow meat in labs'. Subscribe
Topics:
More
Whatsapp Linkedin FB Messenger Telegram Reddit WeChat Pinterest Print Purchase Article Copy permalink