Stallholders tough it out against online marts despite bleeding profits

It was once the haunt of army boys and military buffs. But the iconic army market in Beach Road, the go-to place for army supplies, is on the verge of becoming a relic.

Shopkeepers' leases expire on Dec 31, 2015 and business is at an all-time low.

Owners said the Singapore Armed Forces' (SAF) eMart, introduced in 1997, has contributed to the drop. SAF personnel are allocated credits to purchase equipment either online or at eMart outlets.

"Few would want to fork out their own cash when they can use credits," said Madam Jamilah Nachia, 57, whose profits have halved since 2009.

She used to make about $3,000 every month selling army paraphernalia. 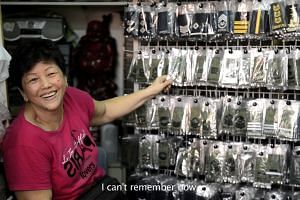 "There's only so much we can do. We can't raise prices as the boys won't come back to us, so we keep profit margins at about 50 cents to a dollar per item," she said. 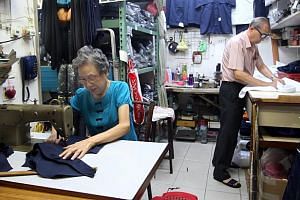 Take a virtual tour of the Army Market

The army market, which comprises a cluster of 111 lock-up stalls selling mostly army gear, is located on the second storey of the 38-year-old Golden Mile Food Centre.

About 99 of the stalls were sold under the Government's Stall Ownership Scheme in 1996. Stall owners said they paid about $60,000 per unit.

The market used to serve uniformed groups in the vicinity such as the Boys' Brigade and units from the former Beach Road Camp. These days, just 70 to 80 per cent of the stalls are open for business on any given day.

The rest of the complex - comprising two levels of food stalls in the basement and ground floor, some of which were resettled from the Jalan Sultan street market in 1975 - is a hive of activity during lunch and dinner.

But those who are there for the food rarely venture beyond the first two levels, and army boys no longer visit in droves despite the market's facelift after a two-month renovation last year.

"They do not know we have returned," said shopkeeper Lau Lian Hoe, 64, of the low-key re-opening in November last year.

So quiet has the floor become that owners take long afternoon naps on stools along the market's winding corridors or on the floor of their cramped units.

Most of the owners, in their 60s and 70s, are there to while away time and have come to accept the smaller crowds. But newcomers are bleeding money, and worried.

"Business has been extremely poor for the past couple of years. We are hardly covering costs," said Mr Hing Bebi, 70, who is now losing about $1,000 every month.

He started renting a stall at the market in 2003 and sells men's clothes.

Prevailing subsidised rentals at such market stalls range from $56 to $184 per month. "We're barely making ends meet and I worry that higher rental rates will cut into the little income I earn," said Ms Lau who is single and earns about $500 selling boots and other army related apparel.

A handful said the centre, which sits on prime property at Beach Road, should be better used and make way for the new.

"Just shut us down. It's no longer as lively as it used to be and it can afford to make way for fancier buildings befitting that of modern day Singapore," said Mr Hing in Mandarin.

Others are clinging to the hope that the centre is here to stay as demolishing a building with more than a hundred food stalls will upset residents and workers in the area.

But should the Government choose to relocate the stalls on the second storey, shopkeepers said it is their wish to move as a group.

"We are a one-stop destination where the needs of army boys, uniformed student units, campers and tourists are met under one roof.

"For any one of us to function, we need to operate together to pull in the crowds," said Mr Low Chong Hua, 65, who sells uniforms.

In the meantime, young blood is attempting to pumpnew life into the tired market by selling different things. Mr Winston Choo, 41, for instance, runs A.I.M. Spec, a two-week-old shop selling products such as toy guns and high-end torch lights from Europe, America and China.

Then there's Mr Steven Teo, 46, whose father has been a locksmith at the market for the past 38 years. Attempting to cater to the younger crowd, he introduced engraving services for name tags and dog tags.

Mr Teo said students often request to have the monikers of Korean bands and celebrities engraved.

Personalised service also makes the experience special for shoppers, said Madam Jamilah. "Here you can bargain with us. We also put together customised camping packs for students and soldiers and explain in detail to them how to use each piece of equipment."

A trip to the army market has become a rite of passage for fresh enlistees, she added.

For instance, when new recruits approach her, she encourages them. "I tell them to take it easy, do their best and make the nation proud."

Stall owners said they also cater to the occasional flustered reservist who goes to them at the eleventh hour in search of a replacement pin or insignia.

Most of their products are sourced locally or imported from countries such as Thailand and China.Mr Haashir Husain, 24, a camp trainer who has been frequenting the market for the past decade, said he enjoys the personal touch and the competitive prices.

"The shopkeepers are very friendly and chatty and their product knowledge is unmatched. We will be at a loss if they go."