Even though Singapore has different religions, different races and different languages, its people respect one another while making sure there is common space for everyone.

Law and Home Affairs Minister K. Shanmugam said this to about 300 Institute of Technical Education (ITE) students at a forum on the dangers of extremism yesterday.

"Of these 20, 18 were radicalised online, so that shows you how important it is to make sure your online space is okay," he said.

"The other thing that is worrying is, in the past, it took about two years for people to get radicalised. But now, sometimes it is two months, three months... Sometimes, internationally, it has even been three to four days."

Mr Shanmugam urged the audience to fight online extremism by actively learning about religion through established sources for a start and, second, to teach their friends and family about the positive messages of Islam: universal brotherhood and sisterhood, friendship, and working and living together in a common spirit.

"Each one of you has to look at yourself as a soldier, fighting for the cause of your religion, helping to put out the true faith, and helping your friends and country," he said.

"We have the situation relatively under control, but neither you nor I can say we have won against radicalisation. And we have to be on guard - and we have to fight back."

The Sunday Times understands the increase in arrests was largely due to the rise of the Islamic State in Iraq and Syria network from 2014.

Yesterday's forum - Dangers of Extremism in the Cyber World: Building Resilience in Youth - was held at ITE College Central. 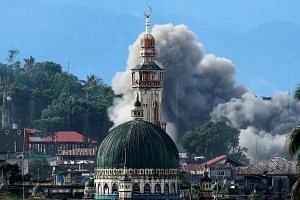 First Singaporean in an ISIS video: 3 questions: 2. The state of terror threat?

How 15 Singaporeans were radicalised by ISIS ideology

It is organised annually by the Inter-Agency Aftercare Group, a voluntary care group. It covers radicalism issues and targets different groups of young people each year.

The forum had representatives from social media giant Facebook and charity Touch Cyber Wellness discussing topics such as identifying fake news and the role of social media in spreading extremism.

In Mr Shanmugam's opening address, he also talked about terrorism risks in the region.

"In Singapore we haven't had an attack, not because the terrorists don't want to, but so far it's been difficult for them," he said.

"The fact you don't worry about suicide bombers is not because they don't want to come but, so far, because the Government, the public and the security forces have worked together to keep them out."

"Hence, counter-radicalisation will always be a work in progress especially for highly globalised and multicultural societies such as Singapore," he added.

Besides improving online algorithms and improving people's digital literacy, he said: "We need to delegitimise extremist ideas by showing how Singaporean values are more humane and just."

A version of this article appeared in the print edition of The Sunday Times on August 12, 2018, with the headline 'Be a soldier in fight against extremism: Shanmugam'. Subscribe
Topics:
More
Whatsapp Linkedin FB Messenger Telegram Reddit WeChat Pinterest Print Purchase Article Copy permalink