Villagers go to rescue of passengers; all 97 of them, including 51 Singaporeans, safe

A trip to popular holiday destination Batam, Indonesia, became a nightmare for nearly 100 passengers on Sunday night when the ferry taking them back to Singapore struck something.

They had to leave the ferry and brave the cold and rain while waiting in open waters to be rescued.

The Maritime and Port Authority of Singapore (MPA) said it was notified of the incident at about 9.45pm on Sunday. All 97 passengers on board, including 51 Singaporeans and seven crew members, are accounted for, it added. 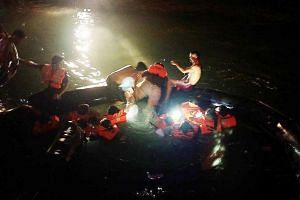 It is understood that other passengers included British, South Korean and Portuguese nationals. No injuries were reported.

The passengers of the Indonesia-registered ferry, Sea Prince, told The Straits Times yesterday that the ferry hit a floating object about 10 minutes into its 45-minute journey from the Nongsapura Ferry Terminal in Batam. 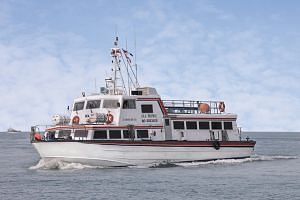 Ms Chella Ho, a quantity estimator in a chemical firm, said she felt the impact of the object against the vessel twice.

"We couldn't see what the object was but we felt this big impact on the ferry, before another impact again for the second time," said the 29-year-old, who had gone on holiday to Batam with two friends.

Passengers said they were told to evacuate the ferry some 40 minutes later, and to board life rafts back to the ferry terminal in Batam.

But water started entering their life rafts. Passengers said they waited from 20 minutes to more than an hour before local villagers came on their boats to rescue them .

Ms Ho, who was on a life raft with more than 40 other people, said: "The water went into the boat and we were sinking... There were people crying and panicking," she said.

Some also lost their passports while getting from the ferry to the boat, she said.

The MPA said that the ferry operator, Batamfast, immediately activated two ferries to transfer all the passengers to the Nongsapura Ferry Terminal after the incident.

When contacted, Batamfast's general manager, who wanted to be known only as Mr Chua, said it was challenging for the two ferries to enter the channel to rescue the passengers. The channel was too narrow to accommodate the ferries side-by-side with the stalled ferry, he added.

The operator deployed three life rafts on the ferry and three bumboats from local villagers to help passengers back to the Batam ferry terminal, he said.

Giving an account of what happened after the ferry hit the object, he said water entered one of the compartments in the hull of the ship after it was struck.

Ferry staff decided to evacuate the passengers for safety's sake even though water had not entered the cabin area, he added.

The monsoon season may have caused the floating object to have gone in the ferry's way, said Mr Chua.

It is not known what the floating object was, but this was being investigated by the MPA.

Ms Christina Siaw, chief executive officer of Singapore Cruise Centre, said that 95 passengers were on board the Sea Raider 2 ferry that arrived at Tanah Merah Ferry Terminal at around 12.20am yesterday.

Two passengers decided to stay back in Nongsapura and did not board the ferry back to Singapore, she said.

"We have been informed by the ferry operator that none of the passengers sustained injuries," added Ms Siaw.

In response to queries from The Straits Times, the head of the Port of Batam, Mr Gajah Rooseno, said yesterday: "The preliminary information we have received is that the ship had just set sail for about 10 minutes from the port when the engine stalled on the high seas.

"Upon checking the engine, it was determined that it stalled because the propeller snagged on a rope in the water."