Travellers arriving at Changi Airport may now face a longer wait to collect their bags.

The airport's "first bag on the belt in 12 minutes" standard was relaxed recently to allow a couple more minutes, sources said.

This follows feedback from industry players, including ground handling firms which process passengers, bags and cargo.

Last year, Changi Airport handled a record 55.4 million passengers, and traffic is expected to grow in the coming years as the demand for air travel in the Asia-Pacific rises.

As part of the changes - the first in seven years - those flying budget carriers are also likely to have to queue for longer at check-in counters compared with those travelling on full-service airlines. 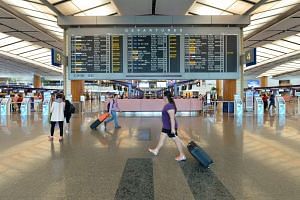 The wind beneath Changi's wings

This is because there are now different standards for the different types of carriers.

It is understood that this is due partly to different traveller expectations and pressures on budget airlines to keep a tight lid on costs to offer competitive fares.

Previously, the rules were the same for all airlines. No traveller should wait for more than 10 minutes to get to the front of the line and another two minutes to be processed.

A spokesman for the Civil Aviation Authority of Singapore confirmed that performance standards had been revised, taking into account passenger growth and changes in the operating environment.

The authority did not provide details of the new standards.

The spokesman stressed, though, that the priority is always to maintain high standards of service.

The head of ground handler Dnata's Singapore operations, Mr Mark Edwards, said it will take time to assess the impact of the changes.

The 40-year industry veteran, who has worked at airports in London and Munich in Germany, said Changi's standards are the highest he has come across.

"Changi is 100 per cent focused on the customer experience and, as a passenger, I appreciate that going in and out of Singapore is a fairly easy and pleasant experience.

"But the pressure and problems it causes us are extraordinary and we struggle with it all the time," said Mr Edwards.

The move towards do-it-yourself options should help, he said. He was referring to the airport's initiative to cut manpower costs and boost efficiency by rolling out self-service options for check-in, baggage tagging and aircraft boarding.

An industry source who declined to be named said the relaxed standards would not have a major impact on travellers. "Travellers are unlikely to be significantly impacted... At most they may end up waiting two or three minutes more."

Housewife Paremjit Sandhu, 49, said: "Flying in and out of Changi is quite pleasant. Even when there are queues, you don't end up waiting for too long. I have no doubt that the airport will maintain the highest standards."

A version of this article appeared in the print edition of The Straits Times on April 20, 2016, with the headline 'Bag wait at Changi Airport may get longer'. Subscribe
Topics:
More
Whatsapp Linkedin FB Messenger Telegram Reddit WeChat Pinterest Print Purchase Article Copy permalink