When she first started as a private tutor in 2009, Ms Janice Chuah had five pupils and was earning less than $1,500 per month.

Today, the maths tutor's income has since grown tenfold. She takes home an estimated $15,000 a month. The tuition firm she founded, Concept Math Education Centre, has also hit $1 million a year in revenue for the past few years.

It has two outlets in Bukit Timah and Novena, and offers maths tuition to pupils from Primary 1 to 6. Classes are usually 80 per cent booked before each school year. 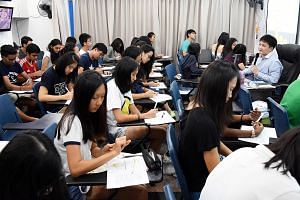 Super tutors who earn at least $1m a year 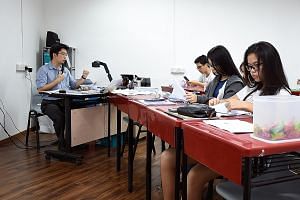 Currently, the centre has an intake of more than 500 pupils.

While there are pupils who go from a failing grade to an A at the Primary School Leaving Examination (PSLE), Ms Chuah said not all show improvement. "While our tutors do their best, the pupil's learning ability, attitude, as well as parents' involvement count."

Before becoming a tutor, Ms Chuah, 43, was a primary school teacher for more than a decade and picked up several awards, including a Caring Teacher Award in 2008.

THEY KNOW THE DIFFERENCE

Students know who are the tutors who care and those who simply do a routine job.

She quit in 2008, as she wanted to spend more time with her three boys, who were then between three and nine years old.

She now teaches no more than four classes of Primary 6 pupils a week. Each session - about two hours - has about 12 to 15 pupils. For pupils taught by her, the fee for the entire year - about $2,500 - has to be paid in advance.

But she admits that competition is keen in the growing industry.

"In the past, as long as we do a good job, we can survive. These days, parents are spoilt for choice, and want to know how classes are taught and how worksheets are designed before enrolling their children."

She insists she became a tutor not for the money, but for the love of teaching. "Parents are discerning and careful where they place their dollars and cents," she said.

"Students know who are the tutors who care and those who simply do a routine job."

A version of this article appeared in the print edition of The Straits Times on May 23, 2016, with the headline 'Award-winning teacher became a tutor for the love of it'. Subscribe
Topics:
More
Whatsapp Linkedin FB Messenger Telegram Reddit WeChat Pinterest Print Purchase Article Copy permalink